In a genre cluttered with dirty beats, over-pierced frontmen, feedback, and growling, grim lyrics (industrial…yeah?), The Birthday Massacre have always appeared somewhat musically clean-cut, with tight production, Chibi’s melodic, feminine, clear lead vocals and an overall upbeat sound. We don’t see that as a bad thing: Too many alternative acts rely so heavily on shock lyrics and hiding poor singing ability behind a vocoder. Making a track sound rough-hewn is easy – it’s clarity that’s hard work. The Birthday Massacre manages to always achieve that clarity while retaining a level of lyrical seriousness and musical punch. 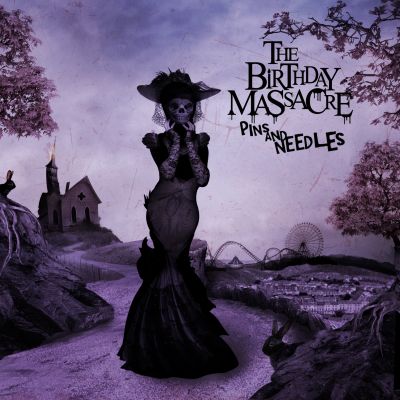 Last year’s live album was more than satisfactory, and the group seem to be going from strength to strength. With that in mind – and the legendary Dave Ogilvie (Skinny Puppy) taking the helm as producer – it doesn’t seem too unfair to expect great things from their fourth studio album – ‘Pins and Needles’.

There’s no surprises on the opening track – one the band themselves rave about. It’s almost a précis of The Birthday Massacre for those who have been hiding in a cave somewhere: Good guitar rhythm with riffs burst throughout for emphasis, soaring vocals and synth-lines, fairytale musical twinkles throughout; yet a somehow sorrowful and melancholy tone. It’s easy to see why this track sits at the front end of the album. ‘Always’ acts almost an extension to the opener; searing the band’s musical ethos into your brain. For us, this is the most poignant and touching track on the album, tracing the trailing-off of a relationship and sorrowed parting of ways. It’s lyrically very savvy.

‘Shallow Grave’ is another track that really stands out, “celebrating” the tragedy of fame through death in a manner that makes the hairs on the backs of our collective neck stand on end. The hook-lines are curt and catchy, with guitar once again used for excellent emphasis. As the album progresses, we experience the full range of TBM’s repertoire. Always clear and concise with short staccato guitar riffs and plenty of twinkly bits, tracks go from punchy and rocky to quiet and almost lullaby-like within the space of a few bars, and back up again to soaring heights. You really have to get used to The Birthday Massacre’s false advertising with the opening strains to many of their tracks: The heaviest intros invariably give way to delicacy after a few bars, re-emerging during chorus lines. The album’s title track is buried deep within the album, and is typical of the phenomenon; starting like a massive rocking anthem, taking a melancholy turn, then delivering a massively catchy chorus-line.

We always moan when an album falls short on production or lyrical ability, and there’s really none of that here. If we could be critical, it’s almost too good. Listening to this album feels like taking a shower with that tea tree and mint shower gel (you know the one!) and emerging clean, fresh and tingly. The depth and sadness expressed in the lyrics can be almost completely ignored by listening to the twinkling noises scattered liberally throughout each and every track. Even the ‘crunchy’ guitar parts seem to be something that your grandparents would enjoy. Overall, The Birthday Massacre always somehow reminds us of ‘The Wizard of Oz’ or ‘Alice in Wonderland’: Cheerily sugar-sweet and colourful, despite scattered references to the macabre. Many vocalists have a lesson to learn from this album. The band is gifted with a great talent at the mic: Chibi always manages to hit the notes she’s aiming for. There’s no faltering or over-reaching going on, and it sounds great.

If you’re a miserable goth or rivet-head who enjoys punching furniture and lyrics involving arterial spray, then this album is not for you. If you want a consistent 4:4 beat to dance to, and no changes of pace in your music, then this album is also not for you. If you’re a perky goth, don’t mind a bit of cheesiness, or don’t feel guilty about smiling and feeling good about yourself once in a while then this album is a must-buy. Here at Soundsphere we’re planning on listening to it a lot; although it may cost us a bit of credibility with anyone who has more than about eight piercings.