Take one part George Thorogood, equal parts Rob Zombie and Johnny Cash, mix it all together and top it with a healthy layer of Tenacious D, and you have something not even close to The Blind Dead McJones Band. Trying to compare the debut album ‘Last Resort Mexico’, from the Leeds-based trio, to anything we have ever heard before would prove to be an impossible task. 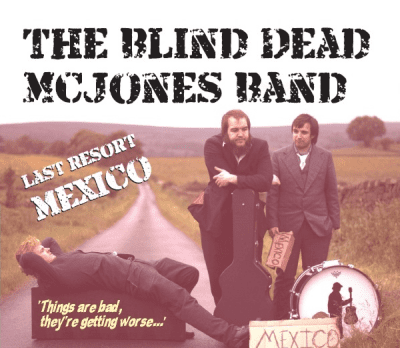 The Blind Dead McJones Band find ways to create their own unique sound while filling the album with farcical lyrics and nostalgic blues parodies. There is no denying the musical abilities of this trio, with phenomenal guitar solos, heavy drum intros, and the captivating vocals of Ben ‘Buddy’ Slack. However, if you are a hardcore blues fan who is into the serious and heartfelt lyrics of the genre, this might not be the best album for you.

The self-titled song lets you know from the start what you are in for; a wild story of the mythical blues legend ‘Blind Dead McJones’, full of hilarious one-liners, and backed by an abrasive soundtrack that compliments the madness of the lyrics perfectly. This track takes you on a journey through Blind Dead McJones’ life beginning at his birth, similarly to George Thorogood’s ‘Bad To The Bone’. However, like the rest of the album, when you think you know which direction the song is leading you, The Blind Dead McJones Band spins you around, leaving you disoriented with lyrics such as: “When my daughter lost her virginity / I went out and I got it back”. This song sets the tone perfectly for the next 10 tracks on the album.

‘Hang On There Boys’ has an intro reminiscent of classic 1980s punk, however we’re quickly led into another classic blues type song, still surrounded by the unique sound of the band. This energetic, and oddly captivating tune, leads straight to the ballad of the album ‘B3D’. While the lyrics in this song are no different from others in the album with hints of satire and mockery, it perfectly succeeds in creating one of the most chilling and memorable tracks on the album, with a story of good vs. evil being told in Slack’s hypnotic voice.

The band then goes into the conflicting ‘Try Some Wrong’, with a stunning 40 second guitar introduction, and the tone of lead singer Slack’s vocals ever-change from smooth to croaky, and oddly alluring. The album continues with the audacious tone set from the beginning with tracks such as ‘BOOBZ’ and the title track ‘Last Resort Mexico’, drawing this chapter of the story of Blind Dead McJones to an end. The album closes with a live performance of ‘Wolf Howl’ with the addition of a keyboard, harmonica, saxophone, another guitar, and Slack saying: “We’re gonna get funky now” leading into a keyboard slide. It’s a fast paced energetic song, with elements of jazz and funk, along with the expected blues formula. This track is the perfect way to end the journey led by the inimitable, The Blind Dead McJones Band.