A lot has been said about London-based bruisers The Defiled – that they managed to get themselves arrested whilst supporting Static-X in Germany, that they bagged themselves a spot at Bloodstock 2008 and at last summer’s Sonisphere Festival, that their gigs turn clubs into veritable warzones where the band members are as likely to be injured as the spectators. Also, that they made number 4 in last year’s Kerrang! Best New Band poll – and all this hyperbole leads you to wonder if they’re actually worth it all. 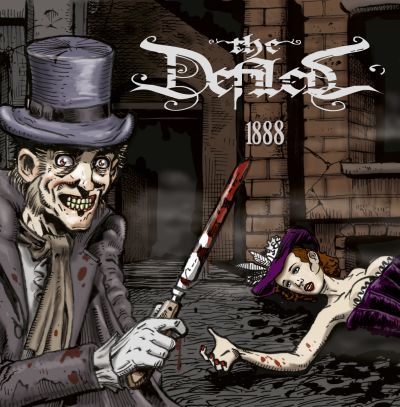 Thankfully, we can answer that question in the affirmative, as ‘1888’- their new release is a ferocious beast… and then some! From the sinister sample that opens first track ‘The Resurrectionists’ to the last notes of album closer ‘Red Tape’ this is an album that firmly nails its colours to the mast. Thunderous drumming, angry vocals combined work throughout with soaring choruses, monstrous guitars and bassline grooves so heavy that they might as well have been carved out of concrete. This is industrial metal, sure, but as you imagine Korn might have tackled it in their heyday, or what Pantera might have sounded like had they been invited to appear on the ‘Queen Of The Damned’ soundtrack.

The only criticism that we can see listeners having with this album is that it can get a little same-y in places – after all, there’s only so much crushing brutality your ears can take in one listening. However, that’s not necessarily a bad thing- we imagine that in a different arena (blasting out of the speakers in some sweaty, smoky, sleazy club, say) this would be an act that would simply grab you by the throat and bludgeon you into submission until you staggered out of the mosh-pit bruised and battered and bloodied, but grinning from ear to ear. Short enough to create maximum aural impact, this is a release from a band worth watching. Expect big, if not huge things.