Has it really been a full five orbits since The Gaslight Anthem first barrelled their gravelly way into our ears and hearts with ‘Sink or Swim’? It was an innocent time, a time before TOWIE when dubstep was “wub-wubbing” quietly away from the mainstream. After a brace of new full-lengths, a side-project, and a (reportedly amicable) split with SideOneDummy Records, the gruff New Jersey rockers return with album number four. 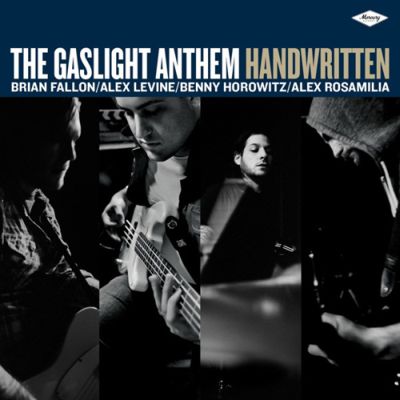 How their first release on Mercury Records is received will depend greatly on the expectations of the listener of what a Gaslight Anthem album should sound like. ‘Handwritten’ is not a punk album, but in spite of some vague punky tones on ‘Sink or Swim’ The Gaslight Anthem have never been a punk band. Brian Fallon has cited his influences as Eric Clapton, Bruce Springsteen, Tom Waits, and The Rolling Stones and anyone hoping to find them moving away from those influences with this album is going to be disappointed.

‘Handwritten’ is the natural progression of the band’s sound but it is more than that, it is the perfection of their formula. The broader musical experimentation of ‘American Slang’ is evident throughout ‘Handwritten’ but there is a clear return to the energy and urgency of their breakthrough release – ‘The ’59 Sound’. Opener and first single ‘45’ in particular evokes the anthemic title track of that album. Not only is it an upbeat chart-botherer, but it also shares the same theme of loss beneath the toe-tapping surface of the tune. The wonderfully knowing lyrics point to Fallon’s awareness of these repeated themes as he sings: “All my friends say: Turn the record over.”

Gaslight’s lyrics have frequently been that secret weapon which has set them apart from other bands but ‘Handwritten’ boasts the most consistent selection of Fallon’s poetic and nostalgic efforts. The title track is part lament and part salute to the art of song writing which keeps the pace of the album at a peak. ‘Here Comes My Man’ gives a little breathing room with the kind of perfectly pitched nostalgia tale that the band excel at. ‘Mulholland Drive’ then evokes Fallon’s darker side project The Horrible Crowes with more than a passing resemblance to ‘Go Tell Everybody’.

‘Keepsake’ is destined to become a massive live favourite, with a seductive stomp and a chorus the size of John Terry’s ego. A slow but standout track ‘Too Much Blood’ returns to the subject of song writing as Fallon laments: “If I just tell the truth there’ll be only lies left for you… if I put too much blood on the page.” ‘Howl’ and ‘Desire’ lift the pace once again before the album winds down with the closing duo of ‘Mae’ and ‘National Anthem’. Fallon’s voice on these haunting songs drips with insecurity and the effect is nothing short of mesmerising.

Some may call this album “middle of the road”, and you’d be hard-pressed to argue against that opinion, but The Gaslight Anthem show no interest in attitude of posturing. All that matters is the writing of consistently great songs and they’ve achieved that brilliantly here. Your Dad will probably love this album but for once that is not necessarily a bad thing. Turn the record over? Nah, this one will be on repeat for a good while yet.