Politics have been dragged into the fore lately. And let’s face it – whatever your political leanings – it’s hard to be actively discouraged by young people caring about the world they’re growing into. Considering the brownish goo of apathy with which the youth of today are systematically tarred, it comes as something of a pleasant surprise to see people giving the proverbial s**t. 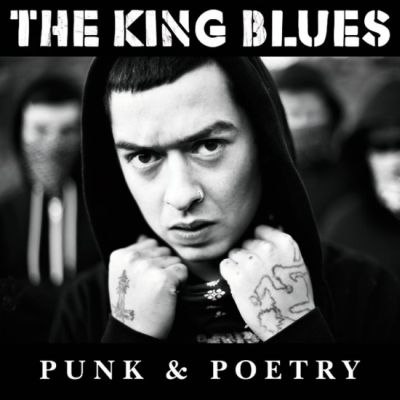 Punk has always been overtly socio-political. That’s rather the point. The King Blues seem to understand this, despite their existence in the weird world of post-this and post-that and – especially in this case – post-punk. It helps that they can write with innovation, and that they seem to know how to make interesting ripples in the culture pool, both musically, politically…and poetically.

There are a lot of avenues down which a band can progress when it comes to hip-hop meets spoken word meets punk meets rock – or drum and bass, reggae and ska in the case of TKB. In Punk and Poetry they have progressed some way down several of these avenues before diverting into others. It shows in the excellent construction of certain tracks and the mediocre composition of others.

‘The Future’s Not What it Used To Be’ and ‘5 Bottles Of Shampoo’ stand out as experimental attempts with surprisingly impressive outcomes. Not that experimentation is usually a bad thing – not by any stretch of the imagination – but because these tracks in particular are cleverly written and manage to experiment with lyrics and musicality as one – and the place of this solution within genre – and they do so without feeling at all hit and miss. It is less a case of smooth transition from genre to genre and more a case of a seamless marriage of styles that often feels forced in the work of other experimental artists.

Despite the praise, experimentation has produced mixed results. Certain tracks stray painfully from their punk origins and get lost in their own individuality on the album; which is by no means consistently interesting from track-to-track. For example, in ‘I Want You’ the combination of short and ultra-political spoken word stanzas with tediously screamed and anthemic pop-rock choruses feels like the worst of My Chemical Romance. Maybe there is an intended irony – and TKB are evidently clever enough to write in plenty of irony, but if so, that irony is poorly deployed within the scope of the album.

The same can be said of ‘Headbutt’. It’s not that it is poorly written; the problem is that it is the product of an experiment – like so much of the album – but doesn’t fit in at all with the direction and pacing created by the other experiments that shape ‘Punk And Poetry’. Aside from the successful results of experimentation, one thing stands out about the album and that is its proudly active political overtone: the punk bit of the title, per se. Political criticism and social commentary ooze from the writing and are carried forth by the same implementation of dry humour and aggression that make British punk what it is today. Whilst the vocal composition is varied throughout, the topic of the lyrics is not – which is a good thing in this instance as it lends the album a much-needed consistency.

‘Shooting Fascists’ and ‘Sex Education’ are prime examples of social and political criticism delivered intelligently and well within the soundscape of the album. Both have their place within the whole and both are well defined in their own rights: one calls out for a remembrance of our cultural history and subtly critiques our current culture, whilst the other uses a blunt example bluntly to hammer home a point. Both do so eloquently. Particular attention can be drawn to the lyrics of ‘Set The World On Fire’ which make a point of reinforcing the notion that, although the statement has anarcho-primitivist implications that would be at home in the world of ‘Fight Club’ – TKB are referencing the exaggeration of anger in society. The lyrics read: “I’m not primitive or anything like that. I only follow the mob to reach the Prime Minister!”

This ability to articulate makes the album poetic. The anger therein and the authentic Britishness apparent in the use of “arse” instead of “ass”, not to mention the contemporary relevance of digs at the current coalition government (or at least its Tory element) in statements such as “Does anyone believe that we’re in this together?” define a feeling of centre-left outrage which does indeed capture the current state of punk in Britain. In this, it is deserving of its title.

All in all, there is a lot of merit in this album as well as a creativity and innovation that makes The King Blues a good listen. There are certainly radio pleasers and opportunities for music videos in the mix as well. They are evidently aware of their surroundings as writers and musicians. Production is of a high quality – as can be expected – with additional production by Chris Sheldon (Feeder, Skunk Anansie,  Biffy Clyro, The Pixies and so on) and by Peter Miles. The music video for ‘Set The World On Fire’ is already available on YouTube.

At the end of the day, there are some pacing problems and some comparatively boring songs on the album when listened to in the wake of its better tracks. Despite these flaws, Punk And Poetry is a culturally relevant and thought-provoking complement to punk’s repertoire in 2011 – this makes it well worth a listen.

The album is now confirmed for 18 April.