With an eclectic mix of screaming guitars, beautiful vocals, moments of insanity and an abundant classic 70’s rock vibe, The Scaramanga Six present their unique genre in the form of their edgy new album, ‘Phantom Head’. 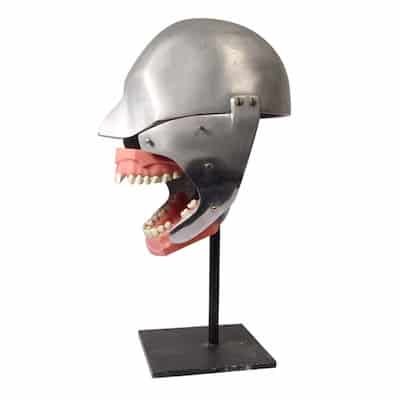 Twin brothers Paul and Steven Morricone, Julia Arnez, Gareth Champion plus the newly appointed band members Stephen Gilchrist and James Kenosha, make up the first six-piece line-up for many years. They have collaborated with the highly praised Steve Albini to produce their best sound yet: recording the entire album live with minimal overdubs. The Scaramanga Six produce a sound which conveys similarities to The Stranglers at their best and vocals as powerful as Bowie back in the day.

The Huddersfield based underground rock band begins their seventh studio album with the daring edgy track ‘I Will Crush Your Heart’ (Sounds kind of cruel, right?) The harshly named track introduces a fusion of gently layered guitar riffs and gradually builds up into an aggressive, passionate song.

Tracks such as ‘I Am the Rain’ and ‘It’s Just A Matter of Time’ depict the band’s elegance as the Morricone brothers’ vocals emulate emotion through the vibrato. Arnez’s and Gilchrist’s fast paced loud drum beats create a combination which demands the listener to pay attention: “Listen to this, or else.”

‘Bristol Butcher’ possesses a balance of soul, country and rock ‘n’ roll. The exciting chorus “The butcher is back!” makes us want to go to Bristol just to see what the fuss about this butcher is really all about.

But the song that really stands out for us at Soundspheremag is ‘The Spider’. The haunting unique melodies of these tracks cannot be compared to any other band. Sure, it has Queens Of The Stone Age influences, but the experimental sound explored throughout this song defines what The Scaramanga Six are about. The artistic manipulation of the vocals effectively altering between whispery threats (“Welcome to the never-ending intestinal tract you will come to call your vocation”) and pent-up angry rants (“I am the spider/I’ll watch and wait for you”) is enjoyable to listen to because of the track’s individuality.

‘Phantom Head’ reinforces a schizophrenic, unpredictable album which is most definitely their best album yet. Elements of rock, pop, grunge and emotional classic rock melodies make it their most accessible album yet.