CD Review: Transplants – ‘In A Warzone’

It was this writer’s birthday recently, and that event succeeded in reminding me what an old ba**ard I am. Not half as much, however, as realizing that ghetto punk-rock supergroup Transplants’ debut LP was released over a decade ago. 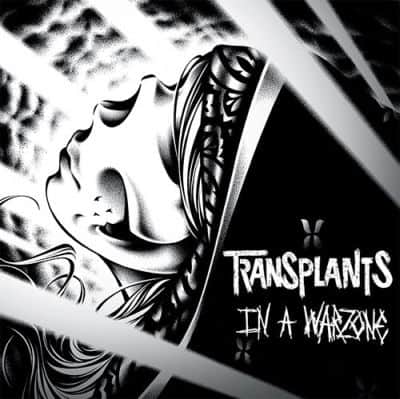 It seems like only yesterday that the iconic mash-up of Rancid’s Tim Armstrong, Blink 182’s Travis Barker and shouty skinhead Rob Aston burst onto the scene, with their innovative mixture of catchy punk hooks, insane cameos and off the charts lyrics. Well, 11 years later and a newly reformed Transplants are back, with their third album ‘In A Warzone’, and trust me, it’s well worth the wait.

The funny thing is, they are picking up precisely where they left off, and the new album is a beautiful compromise of fresh new material and the familiar, trademark sound the transplants perfected on their debut album. Each song is its own; the album follows no distinct narrative, and subsequently this album is a diverse treat, punk rock followed by dirty rap, hip hop and punk co-existing peacefully alongside each other.

The band deal with new ground, however: although phonetically Transplants maintain that optimistic and upbeat style of punk rock, the band as always deal with some pretty heavy issues, and as the individual members have aged and experienced, its clear they are seeing the world through tired, jaded eyes.

Transplants’ debut album dealt with betrayal, death and friendship, and ‘In A Warzone’ carries on, with odes of dishonour and retribution. And hot damn, the band sound amazing. With a collective career spanning over 30 years, The Transplants work hard at earning the title of supergroup, and every member is at the top of their game. Tim Armstrong’s music has seamlessly blended dub, reggae, and good ol’ fashioned punk, is still at the top of his game as a vocalist, and although range and melody have never been his strong point, concise, rasping awesome is still well within his wheelhouse. Travis, of Blink fame, is a maestro of the drums, and every track pulses with the energy he brings to his performances. There are no half measures, and as one of the most reputable drummers ever, he still manages to exceed expectations, and smash convention to pieces.

The tracklisting is thorough and impressive, and as diverse as it is intense. We are blessed here, with one of those rare albums, where every track maintains a level of quality that doesn’t waiver once, in fact many of the songs could be the flagship title , and are all as spectacular as each other.

From artists who created such genius tracks as ‘Sad But True’, ‘DJ DJ’ and ‘California Babylon’, come a whole heap of new tracks, freshly squeezed and dripping with awesomeness. ‘Back To You’ is a fantastic track, fun and energetic, brimming with passion for a genre long since forgotten. Meanwhile, ‘Come Around’ is a drawling, sh**-faced anthem, ripe to be sang along to (or shouted to).  ‘Any Of Them’ is a punk-time machine, reminiscent of Rancid’s most classic output. The truth is, every track is so defining, important and well rounded, the words just won’t do ‘em justice.

This is a band that are hard at work, constantly exploring and tinkering with the genre of punk; as one of the last artists who can confidently label themselves such, these guys are the forefathers. From a generation where every 15-year-old was in a garage punk band, it has become surreal to see punk shrivel and disappear, only to be replaced by the uninspired and the un-energetic. We need more releases like this!