The fifth studio album from the Orem four-piece marks a decade since their highly influential debut. A lot has changed since Bert McCracken first screamed “As we trudged along the mud and tried to call it home…” Each record up until ‘Vulnerable’ has seen the boys alter their sound dramatically and the response has often been mixed. Nowhere was this more the case than on their previous release ‘Artwork’ an album which veered away from the aggressive, melodic anthems, which earned them such a huge fanbase, into a mode far more influenced by electronica. 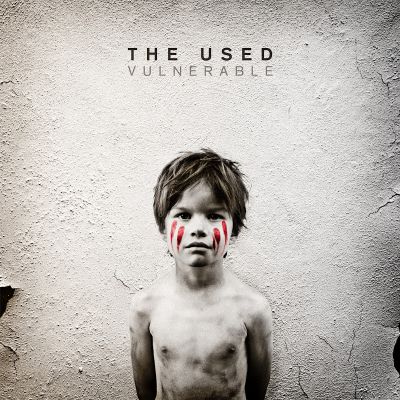 Those fans hoping that The Used will have dropped the electronic elements of the previous album now that former producer John Feldman is back on production duties may initially be disappointed. However, to their credit The Used aren’t a band who bow to popular opinion (perhaps no more evident than in their determination to distance themselves from Warner and release ‘Vulnerable’ on their own label), and for the first time instead of an evolutionary leap in sound ‘Vulnerable’ presents a collection of songs which draw upon the same influences as the previous release. This time, however, the influences are handled with startling confidence and the result is a far more cohesive collection of rock club floor-fillers.

First single and album-opener ‘I Come Alive’ evinces the band’s characteristically playful experimentation sounding like Danny Elfman covering a track from ‘In Love And Death’. ‘This Fire’ continues the trend and boasts an anthemic chorus which would have been at home alongside ‘The Taste of Ink’. For all of their aggression and angst throughout their earlier albums a joyful optimism often bounded forth from the darkness and, whether it’s the freedom from the pressure of the major label or not, one can only speculate but, here that enthusiasm is back and bolder than ever. Songs like ‘Shine’ and ‘Moving On’ re-visit those early themes of escape and hope as overtly as anything the band created.

It’s not all pink flowers and teddy bears though, there’s plenty of aggression here, not least on ‘Now That You’re Dead’ which finds Bert shredding his larynx as viciously as ever. While the balladry of ‘Getting Over You’ and ‘Together Burning Bright’ may polarise some, these softer moments have become staples of The Used’s albums and the variety adds to the overall journey of the LP.

A decade on and The Used sound re-energised and ready to show how relevant they can still be in the current musical climate. Long-time fans of the band will find their faith rewarded here, and to those who have perhaps lost touch over the years, now may be the ideal time to revisit the boys.