Therapy? Have long been one of the most underrated acts in UK Alternative rock but with this album they are starting to get the respect they deserve.
{ma id=B001PS0EZ2&name=Therapy – Crooked Timber} 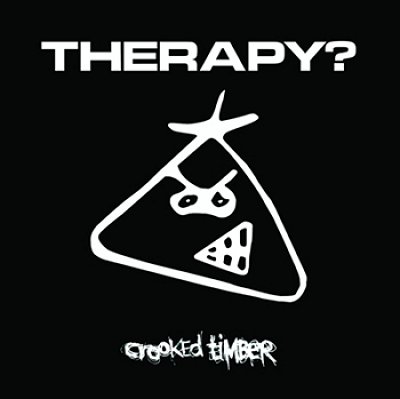 The album’s opener, ‘The Head That Tried To Strangle Itself’ is a progressive rock powerhouse made up of unrelenting riffage and brutal beats, while follow-up ‘Enjoy The Stuggle’ blends strong chugging guitars and Andy Cairns’ trademark pained, angry vocals for a punk-as-fuck rock out that’s one of the album’s major standouts.‘Clowns Galore’ is a witty Alternative anthem with a number of ingredients that should help to turn it into a live favourite. On here, light speed drums brush off of intelligent guitars and raw vocals for a four-minute rollercoaster ride that sees the group experiment with a variety of sounds. Similarly, ‘Exiles’ has an experimental lean, and it works very well. If you combine the Deftones’ most recent sound and their progressive aggression with the early ambience of Radiohead then you might come close to experiencing the awesome force of this.

The album’s lead single and title track ‘Crooked Timber’ is a reflective beast that starts off slow and lulls the listener into a false sense of security with a soulful wall of sound before bulldozing the senses with gargantuan guitars and intricate, excitable beats at around three-minutes, to bring the track to an end on a skyscraping high. ‘I Told You I Was Ill’ attacks from the get-go with catchy tribal beats and dominant vocals that add to the overall impact. A highlight comes at around two-minutes when the quality musicianship of the unit is showcased with a brief but brilliant jam.

‘Somnambulist’ contains an unusually upbeat tone, in fact some may even call it pop-punk…okay, that might actually be quite a stretch but still. Despite the negative lyrics this contains uplifting guitars and a mosh-ready chorus built for live fist-pumping and headbanging. ‘Blacken The Page’ is what Biffy Clyro might sound like if they decided to collaborate with Tool. It’s all pounding drums and full-throttle punk guitars. This one will appeal to a variety of tastes, there’s a little bit of everything in this confusing but weirdly accessible track. ‘Magic Mountain’ is ten-minutes of instrumental progressive-grunge-metal noise that will simply blow your brains out. The build up is an intense mix of light, dark, heavy and soft tones that remind of all the great British rock groups from the mid-90s. Yes, there’s some metal, some Britpop and of course some prog-rock influence in there. It’s truly intense but after about five-minutes of wondering when Cairns’ vocals will hit you are left wondering why it’s so darn long.

The last tune on this proud album is ‘Bad Excuse For Daylight’ and it’s a fine finish that reminds us just how relevant Therapy? remain and indeed, how much they should be praised for their contributions to Alternative rock music, not just with this collection, but with every album they’ve made since 1989.

Check out the video for ‘Crooked Timber’ below: