It’s fair to say that ‘Hidden’ was both one of the most brilliant and most surprising records of 2010. These New Puritans were better known at the time for jerky post-punk tracks like ‘Elvis’ and ‘Swords Of Truth’, and their debut album ‘Beat Pyramid’ was a great record without really being a game-changer. The idea that they’d even attempt to make a record as ambitious as ‘Hidden’ was worthy of praise in itself – and the fact that they actually managed to pull it off saw them rightly lauded as one of this generation’s most important bands. 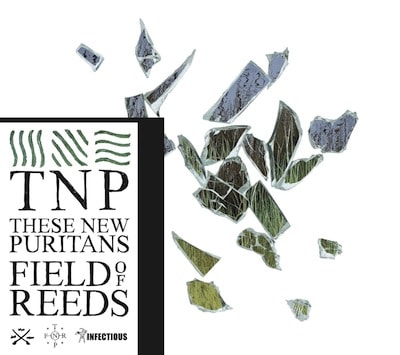 The question of how to follow up such a spectacular album was no doubt a difficult one for the band to ponder. There was talk of a “pop” album, which was (perhaps mercifully) scrapped soon after, with the band’s leader Jack Barnett commenting to the NME that “I’ve realised I actually hate pop music. Most people don’t like good music so there’s no point trying to do something for them.” Instead, the new album seems to explore a different side to the multi-faceted, orchestrally influenced music of their previous record – on top of this, the band have recruited Portuguese Fado/Jazz singer Elisa Rodrigues to provide a softer counterpoint to Barnett’s vocals. Where ‘Hidden’ enraptured its listeners with bombast and fanfare, ‘Field Of Reeds’ is more calm and restrained. But make no mistake, this is a record that absolutely benefits from giving it your undivided attention – it just doesn’t demand it as forcefully.

Opener ‘This Guy’s In Love With You’ underscores that point, beginning with little more than two repeated piano chords and a distant vocal that sounds like someone outside your window absent-mindedly singing along to the song’s namesake (a 1968 Burt Bacharach/Hal Davis composition that was originally recorded by Herb Alpert). The gentle, slightly melancholy tone of the song could be evocative of many things – a peaceful summer’s day, a tranquil patch of countryside, a new beginning, perhaps a forgotten love. But the meaning is never intended to be spelt out explicitly – this is the kind of record where the listener is asked to draw their own conclusions.

A regimented, yet simultaneously off-kilter piano riff marks the beginning of ‘Fragment Two’, which is perhaps as close as the record gets to a conventional song – not that it’s a standard verse/chorus/verse piece of pop music by any stretch of the imagination. It’s more of a musical journey, with the song slowly but implacably marching forward as different musical elements appear, then disappear – faintly sinister vocals (“there is something there” is a repeated motif), string flourishes, trumpet fanfare, the sound of glass smashing, and some utterly exquisite percussion. Indeed, while George Barnett’s drumming was often the driving force behind ‘Hidden’, the decision to rein him in here is not as foolhardy as it might seem – it allows for a more subtle, expressive style that almost feels improvisational despite no doubt having been meticulously planned by his twin brother.

By contrast to ‘Fragment Two’s calmly assured nature, ‘The Light In Your Name’ feels tentative at first, almost as if its component parts are afraid to tread on each other – Barnett’s vocal in particular feels subdued and hazy, deliberately understating its own importance to the composition. The song steadily grows in confidence and complexity, however, eventually reaching a bold crescendo once a thunderous drumbeat kicks in. Then all of a sudden, there’s near-silence, and nothing but the solitary string note that underpins the entire song remains – reminding you that it’s been present the entire time.

The second trio of songs on the album is led by ‘V (Island Song)’, a sprawling, 9-minute piece that manages to avoid being unwieldy thanks to a keen awareness of melody. Whether played dramatically on pianos, sung by choral voices, or expressed by barely-audible synths, the song’s melody morphs and changes subtly, while some refined drumming keeps everything moving at exactly the right pace. ‘Spiral’, on the other hand, uses some familiar elements – a sinister children’s choir, swelling brass, haunting woodwind motifs – to create something that’s very reminiscent of ‘Hidden’. However, the judicious sacrifice of that album’s powerful percussion lends the track its own distinct atmosphere – the sort of quiet desolation that the band haven’t really touched on before now.

The suite is ended by one of the record’s most immediately appealing highlights. ‘Organ Eternal’ is utterly mesmerising thanks to the looping synth line that forms the backbone of the song – it really is a thing of pure, simple beauty. So much so, in fact, that you immediately sit up and take notice when something else steps in to break the reverie, whether it be Barnett’s murmured vocals or the orchestral surge that leads the song towards its climax. Indeed, it’s this latter facet of the song that takes it to truly transportive levels, stirring up your emotions before fading away in a blissful trance.

Changing the record’s pace once again, ‘Nothing Else’ takes the avant-garde classical influences present on ‘Hidden’ to their logical extreme, being a song that truly feels like it was composed rather than simply written. Bookending the moving classical instrumentation that makes up the majority of the track are two brief stanzas that are equally affecting. “I pray that just for a minute/real life and dreaming swap places,” pines Rodrigues, hoping for the impossible but making you believe that it could actually happen, if only for a moment.

‘Nothing Else’ flows seamlessly into ‘Dream’, and its a cappella opening seems very appropriate for the only song on the record that really feels led by its vocal. It’s here that Rodrigues really comes to the fore, her voice guiding the listener through an ambient, spacious landscape. Album-closer ‘Field Of Reeds’ changes the mood again by treating the voice as a mostly abstract concept, with the song’s choral backdrop only briefly interspersed by moments of relative clarity from Barnett. There’s a sense of serenity that permeates this final song, with any tension or fear that may have been present in the previous 45 minutes of music simply melting away.

As a collection of songs that don’t exactly give up their charms easily, ‘Field Of Reeds’ isn’t a record that will please everyone – but that much was clear from the start. However, with repeated listens, different facets of each song will begin to creep into your consciousness, with connections between these seemingly disparate pieces of music forming until the album begins to make sense as a unified whole. Ultimately, some may deem it not worth their time to persist with, which is perhaps understandable but definitely a shame – as anyone who lets ‘Field Of Reeds’ truly work its way into their mind will find that it’s an experience of astounding ambition and incredible depth.