True Widow’s latest EP begins with ‘For Grace’, a beautiful bluegrass-esque track that is very different to the usual distorted sound that we are used to. Setting the tone for the rest of the record; ‘For Grace’ is a track of acoustic guitar that you could listen to over and over again. Seemingly uplifting, an instrumental track that is out of the usual way for TW and a lovely start to their latest offering. 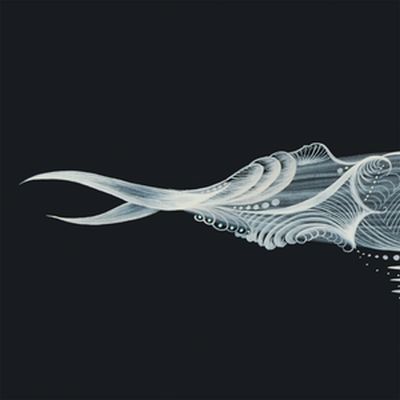 The title track ‘I.N.O.’ strikes back with what we love from TW. Heavy distorted guitars (DH )and sleepy vocals from Nikki (bass) and slow cymbal heavy drums (Slim). Single chords are the order of the day rather than the cyclical nature of the last album. With a slightly faster beat than regular shoegaze fare, the essence is still there and going strong. The longest song on the track at around fifteen minutes, this is nothing unusual for TW. However, it doesn’t drag; instead you enjoy the melody and the general sleepiness of the entire track. After ten minutes, the music drops to a slower and slower pace until eventually stopping to a heartbeat, and yet returns to distortion of cinematic proportion.

‘Bathyscaphe’ (which for those interested is a type of submarine) lives up to its name and connotes deep diving. This is one of the highlights of the EP as it is slightly faster paced and it gets your head nodding and throat humming. If you could make out the words, you would sing along to it, however, in true shoegazer tradition, TW treats vocals as another instrument. The last song, ‘SFHD’ is an enjoyable track that almost has you smiling (though God forbid that that should actually happen!) and vocals that you could sing along to. However, it is still in keeping with the genre with haunting ethereal vocals, heavy, gloomy guitars and slow drums. These last three songs are moody yet not aggressive, like someone staring at you across a crowded room as opposed to being spat at.

All the songs are in the same vein as their last LP (‘A.H.A.T.H.H.A.F.T.C.T.T.C.O.T.E.’), but this offering lets out a little of the constrained emotion that was so tightly held on to in the last one. This makes for a more enjoyable record to listen to on the whole. TW are masters at harnessing the fact that it is the space between the notes, the framing of a song, that is as important as the notes themselves. Haunting, ethereal and unique, TW’s latest shows us that they are constrained, moody and brilliant.