Since the review of Uberbyte’s first album ‘SIC’ is still one of the most popular articles on SPHERE, we couldn’t wait to get our teeth into the follow-up effort ‘DOS’. Are you ready? Here we go… 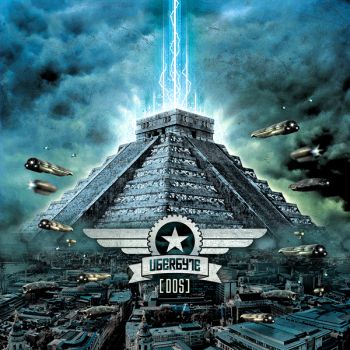 Opener, ‘Under The Cross’ is a serious slice of unforgiving and twisted dark-electro for the cyber masses that will not stop pounding at your skull for the whole five minutes. One thing that is immediately striking about this stuff is that Uberman’s vocals come across much stronger than previously and as such, the raw emotion and natural energy shows through within both the words and the live percussion used. As a result ‘DOS’ seems much more vibrant and accessible to the ear than its predecessor. ‘Say What?’ is an addictive and danceable slice of Industrial pop packed with resounding synths and sledgehammer beats that will no doubt grow to be the defining Uberbyte floor tune.

Next track ‘The Gift’ will soar right through your brain with razor sharp electronics right from the off. On this record as a whole Uberbyte have created songs that are not just made to dance to, it’s possible to listen to this record anywhere and the aforementioned emotion displayed on the tracks, particularly this one (within both the sounds and words) offer the listener something to identify with and really sink their teeth into both physically and mentally. Having said that, ‘Dissect’ is a sample-based dance track that will go down like a storm on the floor while ‘Industrial Bitch’ smacks against the ear as a cheeky-yet-brilliant anthem for every cyber-fan the world over. This one will pummel you with huge beats and biting electronic for a totally euphoric few minutes.

Meanwhile, ‘Soma’ is a techno powerhouse that builds and builds upon haunting vocals toward a massive electro-industrial crescendo. ‘Aeon’ is a distortion filled dance-off packed with tribal influences, this is probably the trippiest and most random tune on the record. This one wouldn’t sound out of place on a Puscifer (Maynard James Keenan) CD. It’s just plain weird and a little funky. With the album’s standout ‘Rewind’ the band shake off the Combichrist comparisons, it’s deliciously dark, slow and emotive with captivating words and strong, winding electronic elements to carry it over toward a triumphant finish.

‘Last Human’ is a mature cyber anthem with mixed samples and clever synths coming together for a totally venomous Industrial powerhouse with ferocious metallic vocals clashing with some sweet synthetic goodness for a grand track that rocks from start to finish. Similarly, ‘Time and Paper’ is a thumping, distortion-led beast without emotion that just drives forward and hits you head on. It really is full-throttle from the word go. We’ll be surprised if this tune doesn’t get picked up for some kind of epic movie fight scene. Next we have ‘(Let’s Put the Fun in) Fundamentalist’, and it’s one hell of a way to step it up before the close. On here, some wicked samples intertwine within rockin’ tribal drums and heafty synths for a track that will blow your mind. It’s followed on by the final effort ‘Ich Will Tanzen‘ or ‘I Will Dance‘ which is, as you would expect an affecting electro track that offers up a  fine-yet-boogie-able ending.

On ‘DOS’, Sheffield natives Uberbyte have showed themselves to be one of the most exciting and relevant bands on the UK Industrial scene with this record.

Who needs drugs in the club when you have Uberbyte…seriously?