Under-promising and over-delivering is a common enough tactic in several fields of commerce. It’s less usually encountered in the music business, though. Indeed, the reverse is usually the norm; big promises, major hype and outlandish claims with the resulting product facing an uphill task in matching consumer expectations. 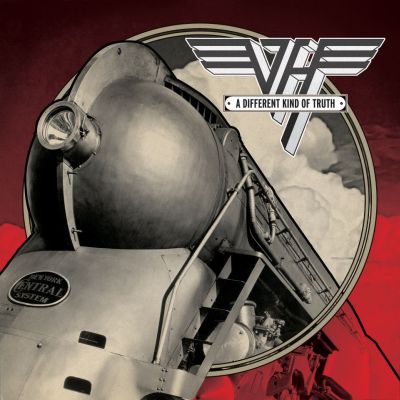 Van Halen, however, have always been that little bit different and with the pre-album release of lead-off single, ‘Tattoo’, they gave us their unique spin on that old under-promise/over-deliver ploy. Yes, it was a somewhat underwhelming experience and not at all what we might have hoped for. Not bad, by any means, but certainly not all we wanted given the twenty eight years we’ve waited for Dave Lee Roth to rejoin the fold and recreate the exultant, upbeat, sunshine vibe of the ‘1984′ sessions.

How amusing, then, and satisfying, too, to discover, on a first spin of ‘A Different Kind Of Truth’, that ‘Tattoo’ is not the strongest song on offer and indeed is easily eclipsed by several much more stellar offerings that really do recapture that classic magic. Even more remarkable, perhaps, it that this was achieved by revisiting decades-old, and in most cases, unreleased demos from the pre-world domination days. Cynics might suggest this was a cop-out and an easy way to make a fast buck but they’d be wrong; the chemistry and the sheer joie de vivre on offer here can’t be faked and, for the most, part, ‘A Different Kind…’ delivers and is a success.

Sure, there are creaky moments, weaknesses and the sort of naffness that only a band as zany as Dave Lee Roth-fronted Van Halen could produce. The introduction to ‘As Is’, for example, is a confused discordant mess and, as it’s the opening cut, induces a definite sinking feeling. Within eight bars, though, the comeback is on and it rips along in exultant style sounding as good as they ever did.

‘Blood and Fire’ comes on, initially, like the mutant off-spring of Rush’s ‘Rivendell’ only to immediately launch into the kind of high-octane, cheery work-out that wouldn’t have sounded out of place next to ‘Panama’. DLR, unsurprisingly, is showing signs of vocal wear but then who ever bought a Van Halen album for operatic acrobatics? No, DLR’s strength has always been in the sly humour of his delivery and here he sounds remarkably undiminished.

Great, too, to hear Alex Van Halen retaining that distinctive closed-snare sound which, surprisingly, has often been as integral a part of the Van Halen sounds as brother Edward’s fret-board pyrotechnics. Ah, yes; Eddie. What of him? Relax. The mercurial shredder is on fire, frankly, and all you’d hope for is here. Dive bombs, skips, the frenzied tapping licks and those famous ‘passing’ notes spring forth with the sort of welcoming bonhomie of spring daffodils. Arthritis, obesity, a dodgy hip, cancer and divorce are clearly no match for the man’s legendary talent.

Yeah, this is great fun and while it certainly isn’t the greatest Van Halen album ever released it’s more than matched the expectation and is as credible a release as any they’ve yet recorded. Great to have you back, fellas. Now, about those UK dates…