If you haven’t heard of VNV Nation – indisputably the most popular and successful UK-based EBM act there has ever been – you’ve clearly been living in a box somewhere in a monastery in the Outer Hebrides, so we can dispense with the part of the review where we tell you startlingly obvious things about the band. And we assume that if you’ve got this far, then you already appreciate the duo’s polished, perfectly produced, euphoric yet often mournful, catchy Synthy-EBMy sound. Furthermore, you’re clearly happy to have a rather portly and chipper Irish bloke dictating the lyrics over the tune, rather than singing them. It’s part of the charm. 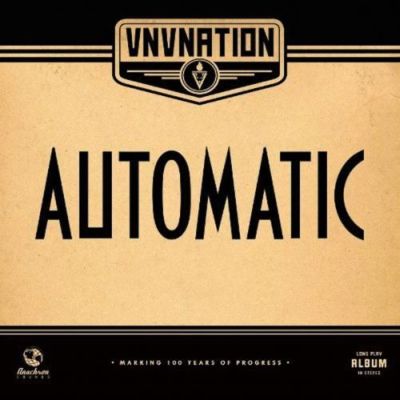 We’ve really been looking forward to this release, despite the slight trepidation that VNV might have somehow managed to go off the boil since their last album. But before we put the CD on though, we’re going to make a prediction about it’s contents: This album will feature an instrumental intro track, a massive floor-filling single, another floor-filler that’s not quite as awe-inspiring and so will barely get any club-play, a slightly incongruous instrumental track, and a bunch of epic, melodic trance stuff. There’s been a noticeable pattern to recent VNV releases, but it’s not that VNV have a bad formula: quite the reverse; they have a winning and enjoyable one.

Unsurprisingly, the album starts off with an instrumental; this time featuring a piano and a bit of long wave radio interference; though VNV are so polished that even the interference sounds slick. It sets the mood for the album well and allows you to settle down with a cup of tea and clear your thoughts, but it’s probably something that you’ll find yourself skipping during future play.

‘Space And Time’ then kicks in with an electronic harpsichord and we’re firmly off the starting marks. A brilliant, building sound, punctuated by Ronan’s distinctive lyrics and a cast-iron proof to any listener that yes; this is definitely a VNV album. There’s a stop-start harpsichord solo in there that’s simply brilliant, and the track reaches a cheerful crescendo. The foot-tapping continues with ‘Resolution’. The chorus lines raise the hairs on our arms, and there’s an evocative, prideful feel to the lyrics.

Those of you who have caught VNV Nation over the summer months, or have been slavishly following the band on YouTube will recognise ‘Control’ instantly. Everyone else will soon come to recognise it, as it’s going to receive a lot of club play in coming months, in line with the likes of ‘Chrome’. Crunchy yet polished, strutting, punchy, proud, sweat-inducing EBM. Yum.

‘Goodbye 20th Century’ is a gentle instrumental – almost classical – track. Just the kind of in-car music to prevent your blood boiling when cut-up by an Audi driver. It’s chased by ‘Streamline’, which gently ups the tempo, although the song’s lyrics seem to lack VNV’s normal punch and content. They feel somehow empty: A collection of flowing syllables that lack conclusive content, making this the weakest track so far. The next one lifts our spirits again: ‘Gratitude’ features a trancey but more upbeat vibe and the distinct feeling that the lyrics really mean something to Ronan, rather than simply having been crafted to fit the music.

‘Nova’ is classic, epic, emotional VNV at their best: An almost mournful 5am wind-down track destined to steer wide-eyed and twitchy couples into lengthily proclamations of love for each other. Ronan even squeezes an “illuminating” and “shine your light on me” into the lyrics. Magic. Although six minutes is perhaps pushing it for straight-edge listeners.

‘Photon’ is another instrumental, complete with plenty of lengthily electronic chords over a fairly rapid bass line, but it doesn’t really seem to progress throughout its six-minute duration. That leaves one more track to play on this slightly short-feeling album. It’s another fairly laid-back track with an instrumental sound that slowly builds and crests before slowly emptying out, conveying hope and leaving the listener both slightly melancholy, yet happy.

In closing, this album is everything we’ve been looking forward to, predicted and wanted; another excellent and emotional album. There are a couple of tracks on there that lack progression – which is then highlighted by a long duration – but they’re still musically solid: It’s just that VNV set an enormously high bar for themselves. It’s tough being number one. One day VNV Nation might lose their edge and produce something disappointing, but that shark is definitely not being jumped today.