CD Review: We Are The Ocean – ‘Maybe Today, Maybe Tomorrow’

The third full-length from We Are the Ocean was always going to be an intriguing beast and we’ve been looking forward to unleashing it on our expectant ears. Earlier this year the Essex boys dropped quite the bombshell when they announced that vocalist Dan Brown (no, not the Da Vinci code douchebag) had left the band to concentrate on managerial duties just a handful of days before the Download Festival. 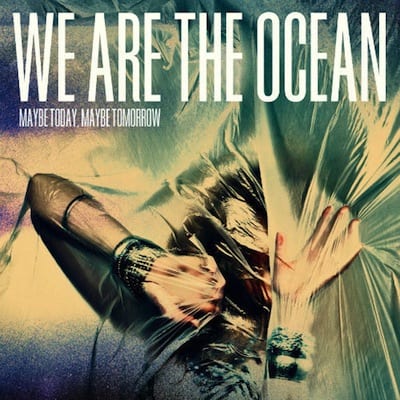 To their credit We Are the Ocean still gave it their best but it’s fair to say that without their charismatic frontman and resident screamer the response they received was fairly lukewarm. A couple of months on and it’s time to see how the band have managed the transition to a four-piece.

The simple answer is: admirably. Right off the bat let’s just say that this is one damn fine album with a clutch of sure-to-be-successful rock songs. However, as with any transitional album for any band, this one may prove divisive amongst their faithful. To be fair to vocalist/guitarist Liam Cromby, he has always had the vocal ability to carry a band without the need of a twin vocal to spread the load. His is a commendable range with the ability to switch from a soulful clean to a ferocious rasp with startling ease, but one thing is for sure: We Are the Ocean are post-hardcore no more.

Whilst it will always be a collective truth that labels and genre pigeonholing is a reductive and artless business, it is abundantly clear that the band, already massive favourites with the Radio 1 playlisters, will find themselves receiving a much greater portion of airplay with their increasingly mid-road sound. This is not a criticism in any way shape or form, by the way – let’s face it we can all give a giant two-thumbs up to the idea of some good-quality rock music on the radio right?

The ten-track album kicks things off in a sombre mode with the brief piano-led ‘Stanford Rivers’. It’s a beautifully sung mini-beast which serves as an introduction to first track proper (and single) ‘Bleed’. This Zane Lowe endorsed anthem boasts a great riff and one of the catchiest choruses of the year so far. From there the anthems don’t stop coming. ‘Young Heart’ is another mighty sing-a-long tale of yearning for parental approval. It’s a personal song and may prove a little overly sentimental for some listeners, but hey at least he’s not singing about his nan or his cat right?

The pace of the album keeps up through ‘Story Of A Modern Child’ which introduces an almost southern-rock twang, before allowing Tom Whittaker a chance to show off his considerable skin pounding skills on ‘Machine’. It’s another track that pulls the listener in and builds and builds into an epic climax, and the heavy focus on the rhythm section here works well for the song. Mid-album tracks ‘The Road’ and ‘Golden Gate’ drop the tempo a little with the former in particular aiming for the darkest moments of the album. The latter once again attempts to build toward an epic ending but it never quite pays off and instead begins to outstay its welcome somewhat.

The title tune is a melodic number but ultimately doesn’t live up to the success of the more anthemic moments and ‘Pass Me By’, with its building momentum and fist-pumping chorus, begins to give a formulaic impression of the album’s songs overall. Closer ‘Chin Up, Son’ is a perfectly serviceable if unimaginative acoustic number which is ultimately forgettable. Unfortunately at just ten tracks in length, including the short opener, there is little room to allow for easily dismissible songs.

Overall this album is rock-solid if a little unbalanced with so many deserved future hits occupying its first half. What the band have achieved here after the loss of Dan Brown is remarkable. It’s a very different sound that the boys are boasting now but, if there’s any justice in the world (and there occasionally is) then this album should see them firmly rubbing shoulders with other radio-darlings such as Kids in Glass Houses and You Me at Six. If you like your rock polished and anthemic then this could be the album for you.

For more information visit the official We Are The Ocean website.