CD Review: We Got This Far – Bluntforcevolume

‘Bluntforcevolume’ is an exciting new chapter in modern Industrial music. Opening instrumental track ‘Breath Before The Plunge’ is an exhilarating blend of drum n’bass and deep metallic fury that leads perfectly into ‘Like Dying’ which is a methodical mix of heavy, emotive vocals and sledgehammer beats. This track will resonate with fans of ferocious dark electronic music. The lyrics are deliciously spiteful-yet-full of painful truths. 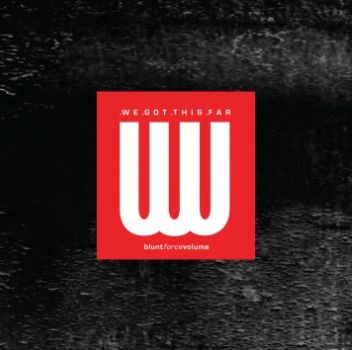 ‘.Sedona’ is the result of what would happen if The Postal Service collaborated with Trent Reznor. Light electronics mix in nicely with acoustic guitars and deep, seductive vocals for a massive tune. ‘Mistep’ is an intelligent electro-rock beast that sees exceptional guitar lines wrap around pure Industrial elements at a furious and unrelenting pace. ‘.Endgame’ offers a contrast to earlier tracks with some soft vocals, acoustic guitar sounds and 80s-style keyboards for a Radiohead-meets-Skinny Puppy powerhouse before the schizophrenic ‘Cave In’ which readily switches between soulful ballad-esque tones and heavy-as-hell beats, with guitars that are solely created to make your ears bleed while you sit there smiling and swinging your head about like a weirdo.

‘Bludgeon’ is a bloody fantastic rocker that builds and builds to create a grandiose anthem (and possible floor filler) that will appeal to your ears in the same way that A Perfect Circle or an early NIN track might with prominent beats crashing around classic guitar elements and a progressive sheen. ‘Anywhere But Here’ is the most sensitive tune on this offering but it is by far the best. It mixes the raw chaos of later Marilyn Manson with an underlining influence of The Cure. This song might make you rock, it might make you cry but it will certainly capture your senses in some way that will not allow you to forget in a hurry. The follow-up tune, ‘So.This.Is Doom’ is an atmospheric break in pace that utilises distorted guitars and skyscraping keyboards. While many may find this kind of noise disturbing, most of you will no doubt think it soothing. Put this on if you can’t get something off of your mind, be it a girl, work or the dint in your shiny new car and you will have a few minutes of pure electro-rock goodness to distract you. Even as the heavier parts kick in at around four minutes and despite the songs desperate and dark ideas, this one will keep you interested as it gets more twisted throughout the entire nine minutes. The final track on here is ‘Someone Somewhere’, and it reworks the ideas on ‘Cave In’ adding some accessible guitars and addictive synthetic parts for a fine close.

This album is very dark, but it’s tastefully done. There’s a song that covers every emotion on ‘Bluntforcevolume‘, and there’s so much substance within the lyrics that you will almost certainly find something to enjoy and relate to here. We Got This Far are a band that you cannot afford to ignore this year.

For fans of: Nine Inch Nails, 16Volt, A Perfect Circle