Wednesday 13 has been working for the last twenty years on numerous projects. From a career high note as the frontman for the Murderdolls, to the bizarre country band Bourbon Crow. Wednesday 13 is back with his latest solo offering, ‘The Dixie Dead’ and it shows that all the years of experience have helped to create what could be, one of his best albums yet. 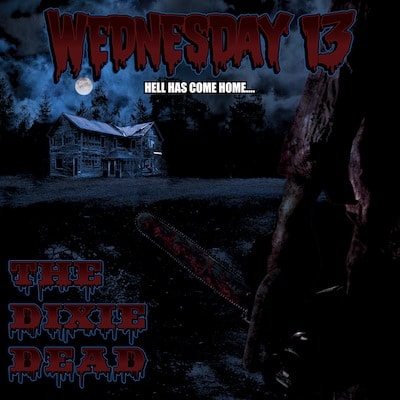 During Wednesday 13’s solo career he has been working on defining his unique take on the horror-punk genre; delightfully mixing sounds of pure rock ‘n’ roll with lyrics based on horror and the supernatural. From the catchy upbeat lyrics of ‘Fang Bang’, to the much darker ‘Skeletons’, Wednesday always seems to deliver solid albums. This latest release opens up things up to the audience much more, and is much heavier than previous iterations.

Let us begin! The opening track ‘Death Arises’, and the overture of the same name feel like the opening titles and credits of a movie – a dark movie, with gore and black humour and stuff in it. It sets the tone perfectly for the double feature this album is. Yay! As soon as the signature Wednesday howl bursts into the first song, ‘Blood Sucker’, it’s clear to hear [ace rhyming there, Anth -ed] that Wednesday’s voice remains on form! Not only that but the lyrics are exactly as you would expect from the man, “I’m a blood sucker, motherfu**er”, and such. This offering is a real head-banger, and strays into an interesting almost White Zombie brand of alt-metal at times, but this, of course, works with Wednesday’s gravel-tinged tones!

This intense heaviness continues across the songs, ‘Too Fast For Blood’, and the groove-inspired ‘Get Your Grave On’ [lol -ed]. ‘Curse Of The living’ actually sounds like a Metallica track. No, really. This is certainly the heaviest we have ever heard Wednesday’s voice come across, and it works very well! The last song on this first part of the album ‘Hail Ming’ (great title!) continues on with the alterna-metal edge but adds some small industrial elements which work with the fact that the song is about a cosmic galactic enemy. The cosmic enemy, actually.

It’s at this point that the album takes a slight turn. So far, the album feels like two grindhouse movies with a trailer in the middle…a sexy trailer. ‘Coming Attractions’ fires of next, and it sounds like the trailer from one of these movies with a voice-over to match, and scenes from a movie we can’t see. This is a great opening for the ‘Dixie Dead’ which is bound to become a staple of Wednesday’s live tracks. This sounds much more like the Wednesday fans will remember.

The song ‘Ghost Story’ changes the mood slightly and is almost a ballad, similar to ‘Curse Of Me’ (from ‘Fang Bang’). It’s a mild relief from the heaviness of the first part of this album, but is a superb track! This fits in perfectly here before the new Wednesday sing-a-long tune ‘Fuck You (In Memory Of)’ (every W13 record has to have one). We are sure this song will turn into a proper anthem; fans all singing “f*** you” in unison during live gigs (awww…sounds lovely) will surely see the track fitting in nicely with Wednesday’s tongue-in-cheek back-catalogue. ‘Carol Anne…They’re Here’ Is adds another famous horror character to his long growing list of horror-tribute tracks and it continues with the great with that we have become to expect from our Wednesday.

None of this is as heavy as the first part of the album, but the two work together to form a great body of work! This record is a great summation of the last 20 years of Wednesday 13 and will delight hardcore fans alongside the new breed of ghouls starved of real rock ‘n’ roll attitude and a good fu**ing sense of humour.”