Justin Lockey‘s new band is very different from his old bands. The much-loved and critically acclaimed Yourcodenameis: Milo specialised in abrasive post-punk while British Expeditionary Force mixed the sweet vocals of Aid Burrows with Postal Service-style electronica. With this background, Lockey‘s move into Coldplay and Editors territory with White Belt Yellow Tag is not a good one. 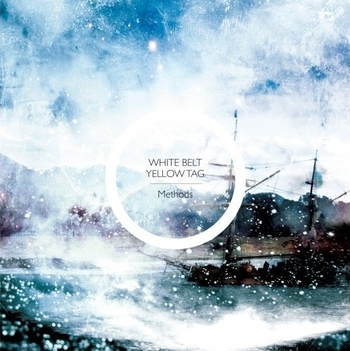 That isn’t to say that Lockey isn’t trying. In little under a year, White Belt Yellow Tag have toured, joining The Automatic on their trip around the UK, and have released one EP and two singles creating much buzz. However, they come unstuck on their first LP, ‘Methods‘. Lockey co-wrote the album with friend and vocalist Craig Pilbin (they are joined when playing live by ex-Cooper Temple Clause drummer Tom Bellamy) and recorded it in less than two weeks. The speed of the recording was no doubt a contributing factor to the undernourished nature of some of the tracks on the album.

Tracks like the closer, ‘Careless Talk, Sinking Ships‘, and ‘Where Echoes Land‘ always threaten to move up a gear into something exciting but never do. The duo is hampered by Pilbin‘s voice, sounding like a less emotive Guy Garvey from Elbow or Dove‘s Jimi Goodwin. He regularly switches up into a falsetto to convey emotion, using this trick far too often over the course of the album. The unspecific, wooden lyrics throughout ‘Methods‘ (the kind that Coldplay‘s Chris Martin has helped to popularise) hold the group back.

I would stop short of saying the album doesn’t have anything to lend itself to listeners, However, on some tracks, such as ‘News‘, the duo combine to create something both exhilarating and affecting. The faster drumming, xylophone and Pilbin‘s lyrics about someone being “impossible to bear” and Lockey‘s guitar sweeps conveying true feeling. The guitar sounds throughout are excellent, making the group sound much larger than a duo. But all-in-all, the album is too long, tracks like the boring ‘We All Have Sound‘, and the emotionally empty ‘Ode‘ (aptly featuring the lyric “This is my ode to nothingness“) better off on the cutting room floor or as B-sides.

It is all too serious, attempted emotive guitar and drums surrounding lyrics like “Everywhere there’s a reason to despair” (‘Same Clothes, Same Life‘). There is not enough variety to sustain a listener’s interest over the plus-40 minutes run-time. A disappointing debut.