For nearly a decade, XP8 have been the burning ember in the EBM inferno offering an amazing display of genre-adapting skills that have blazed the trail for their current popularity and success. ‘Drop the Mask’ sadly does not continue that winning streak due to the generic tempos and over used samples which lie heavy on this album, flattening all the energy and fire which was once the driving force behind the Italian bass-junkies. 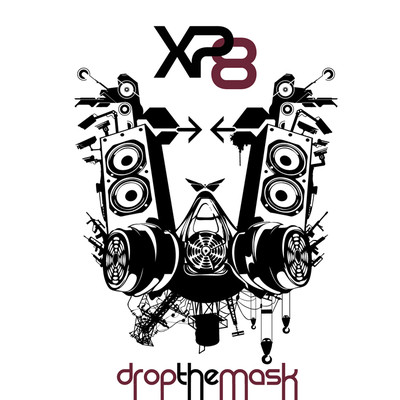 The opening track ‘Blind’ has great synths and a quality beat but is let down by the overstrained vocals and lack-lustre progression within it. ‘Want It’ has a promising start with its Depeche Mode inspired bass-line and dirty German intro but sadly hits a brick wall and fails to build up any momentum. ‘One True God’ is a more stable track. The beat is superb giving the track instant dance-worthy status, an attribute XP8 must pride themselves on.

‘One Pill Missing’ follows more along the lines of their previous work. A well-devised track that stomps hard on your head but falls prey to the “heard it all before” samples that the have-a-go industrial bands use today. ‘Breathe The Poison In’ however, uses an interesting beat system which changes throughout and marries up with the synths in the latter half with absolute perfection but is ruined by the poorly mixed vocals that disrupt the flow of the track. Thankfully though, ‘Awake, Restart’ is one of the strongest on the album. It is a welcome change of pace – it’s a real heavy, dominating bass track and here none-intrusive vocals let this track really shine. ‘Born Dead’ really heats up fast thanks to an appearance from Faderhead in this simple but solid club-monster, going to show that there is still hope. Again this album has some great individual tracks, but it’s so inconsistent. ‘Out of Control’ features unimpressive beats and phone-style vocoding before the title track ‘Drop the Mask’ launches itself at the listener with blistering ferocity carrying with it a late-nineties Euphoria dance synth that is a welcome enhancement to an otherwise mediocre tune. ‘Scorpio Eyes’ comes across sounding like something Blaqk Audio (Davey Havok and Jade Puget from AFI‘s electro side-project) would come out with, especially in the vocal department. The only difference is that this has been done with less style.

Meanwhile, ‘Out For Blood’ plays host to a collaboration with the renowned scene DJ Fetish Dolly in this dirty, sexy triumph of a track. Her spectacularly sinister vocals truly put a sharp edge on this beast. ‘Bad Guys’ helps to keep the strong pace going and it’s a kick-ass effort that displays the glory of XP8’s founding talent. The bass is punchy, energy is full-on and fresh and delivers a true club set-list starter, quite possibly the saviour of the album. ‘Our Time, Pt 2’ puts the full stop on the list by laying some stunning slow-grind beats and alto-choir backing vocals that give a nothing short of sheer brilliance. If only this sort of effort was put in to the majority of ‘Drop The Mask‘, who knows what the band could have accomplished?

In short, one of the main issues with this record is that it’s been done before, namely by XP8 only with more finesse and structure. For their fourth studio submission this should have put them on a new level. The album does have some gold dust in there but the poor track arrangement kills the flow and loses the listener to the skip button numerous times thus creating a bad impression on what is an otherwise spectacular band.