CD Review: You Me At Six – ‘Sinners Never Sleep’

Home » CD Review: You Me At Six – ‘Sinners Never Sleep’

This is You Me at Six’s third album in four years, or chapter three: in which the band tear up the rule book and start again. As Dan Flint, the band’s drummer told this very website, this album represents “a kind of rebirth” for You Me at Six. It’s a more grown up sounding, confident album. 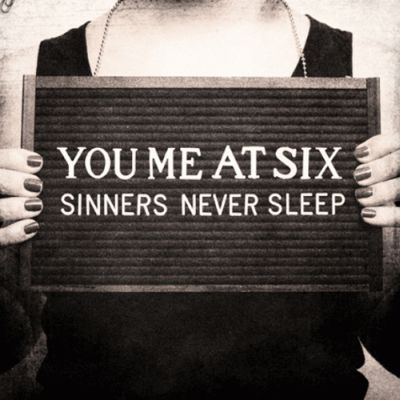 Away from the pop-punk template of the last three records, ‘Sinners Never Sleep’ has more of a straight-up rock vibe. It’s an album populated with a collection of radio-friendly poppiness, peppered with a few brilliant flashes of measured fury.

For the most part, tracks like ‘No One Does It Better’ are straight-up American-influenced radio rock that wouldn’t be out of place on the soundtrack to a teen movie. It’s a slick, anthemic, rock masterpiece. You should feel a bit dirty for liking something so unashamedly aimed towards the top of the charts but You Me at Six have somehow managed to create something both commercial-sounding and likeable.

The standout tracks on this LP ‘Bite My Tongue’ and ‘Time is Money’ feature guest vocals from Bring Me the Horizon’s Oli Sykes and Winston McCall from Parkway Drive, respectively. These tracks, naturally, are the heaviest on ‘Sinners Never Sleep’ and they’re both brilliant. The mix of You Me at Six’s old post-hardcore sensibilities and their new approach to songwriting meld perfectly and produce something that sounds completely fresh. The aggression that the guest vocalists are there to provide is something that sounds completely natural to You Me at Six and it’s a shame that they don’t exercise that fury more often. Like The Clash said: “anger can be power”.

In Sinners Never Sleep, You Me at Six have refined, rethought and reinvented themselves. It’s not a million miles away from their old sound, but it is far more ambitious. It’s the sound of a band growing more confident in themselves. The future just got a lot brighter for You Me at Six.