This album announces Zeitgeist Zero as the premier Industrial rock act in the North of England. Blending hard industrial with ethereal Gothic soundscapes, ‘Heart To Black’ is a slap in the face that will sting for days. Furious guitars smash against Teresa Dead’s raw and angst-ridden vocals. 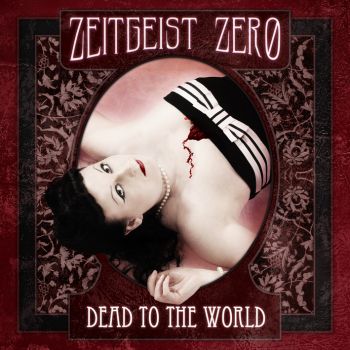 The production skills of former Depeche Mode and NIN producer John Fryer shine throughout the album taking the ZZ sound to a whole other level. On fan-favourite ‘Party For One’ the synths cut like a knife through distorted guitars and addictive beats before ‘It’s Not Easy Being Strange’ hits the listener like a glittery sledgehammer to the head with a Goth-punk powerhouse with some quality samples and some particularly attractive drumming. Next up, ‘My Heart (Has Left The Building)’ moves things forward with a venom and spite that is unique to the Leeds-based four-piece. Haunting keys mix in with seductive vocals for a solid opening before abrasive guitars push in and create a dancefloor friendly rocker.

‘The Broken’ is a heart-wrenching piano-led ballad that shows the band to be worth all the hype they have received recently. This is a playful track that nods toward Emilie Autumn and the Dresden Dolls but still keeps the distorted Zeitgeist stamp. ‘The Grudge’ is a tribute to the tragedy of the late Sophie Lancaster. It’s a scathing attack on those that are ignorant of other cultures and ideas. ‘Big Bad Wolf’ encapsulates the spirit of Zeitgeist Zero perfectly. It’s a rockabilly stomper with classic guitars, funky keyboards and proud vocals. This is definitely the album’s standout and it will no doubt be the band’s defining track in years to come. ‘Caress’ is an enchanting and jazz-infected blues tune that catches the listener of guard for a surprisingly pleasant few minutes. This is the most adventurous thing the group have ever done, and it’s undoubtedly one of the greatest things they will ever put out. Meanwhile, ‘Unlucky 13’ throws the listener back onto the tracks and attacks with blistering guitars and Industrial metal rhythms ala’ Deathstars. It’s one of the most abrasive and effortlessly dark tracks on the record and it sees the band really step it up and blow the roof from off of their haunted house before the final track ‘Blood’ comes off as simply epic with driving guitars and euphoric piano workings that amalgamate for a fine and defiant finish. This record is a grand testament to the hard work of a group who have never felt limited by their style or genre.
This album is a collection of wide-reaching anthems for modern dark culture. No, we’re not dead yet.
For Fans Of: The Start, Garbage, The Screaming Banshee Aircrew
Check out this promo video for ‘Party For One’ below: