16Volt’s new record sets the bar for modern Industrial rock. Right from the off ‘Alkali’ strikes with the Eric Powell’s trademark shout alongside the ever essential cutting guitars, winding electronics and rock hard drums. It’s a dark, dancefloor-friendly anthem that’ll have loyal fans nodding along and newcomers wondering where Powell has been all of their lives… 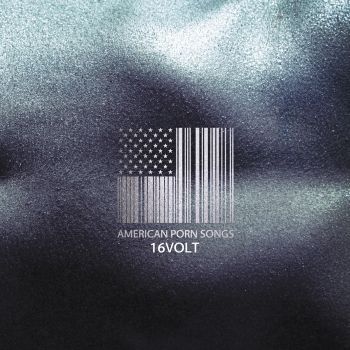 ‘Enjoy The Pain’ is varied mix of pure Industrial influences encased in a hard punk shell. This one might be loud as f*ck but you will certainly find something to relate within the lyrics. The Volt sound incredibly tight on this one and Powell’s production makes everything sound crisp and brutal. Follow Up, ‘With Fire And Burning’ is a solid track that’s built on a strong background of synths, powerful guitars and varied drum work. This is one of the best things they’ve ever written and it will surely become a live favourite.

The next tune on offer is ‘It All Turns Bad’ which is an angst-ridden cyberpunk-metal standout built for those euphoric bedroom rock-outs. If this doesn’t tickle your fancy then you obviously need your wires checked. This is a vibrant track that’ll kick your lobes in and leave them wide open for more pulsating rock in the form of ‘Blackbird’. Here the band takes a different, more stripped down approach but there’s still enough electronic fury and substance to rival the best work of Nine Inch Nails or Skinny Puppy. Similarly, on ‘The Lord Doesn’t Want Her’, squelchy synth work collides with some credible drumming inside a chaotic structure for a fist-pumping and heart-stopping affair that provides a wholesome dose of meaty rock goodness with lashings of spicy techno to provide you with the ultimate crossover feast for the senses.

‘Becoming Your None’ recalls early 16Volt more so than any other song on the record. There’s the same spite and malice that dominated albums like 1994’s ‘Skin’ but with a renewed vigour. It’s this kind of track that will make people believe in Industrial rock again. It’s emotive, dark and heavy and it’ll rock your socks right off. ‘Can You Find God?’ continues along the same lines with skyscraping guitars and varied synth work. It’s a scathing attack on those who rely on others for support instead of taking responsibility for their own actions. This one will resonate with many, and in turn it will inspire some sing-a-longs at live shows. ‘Orange Insect’ is probably the heaviest and darkest tune on the record, it’s a shot at a former love and it strikes hard and fast with some quality guitars and Powell’s best vocal performance yet. ‘Useless People’ has a wide appeal and it should see heads-a-bangin’ all over the globe – it’s got everything you need to vent your frustrations and as a result metal and Industrial DJs should take note of this one. It mixes hard rock, glitchy electronics and a furious punk attitude for resounding results.

Meanwhile, ‘Somebody To Hate’ rocks the floor in a way that would make Al Jourgensen (Ministry) proud. There’s absolutely no give on this prominent Industrial metal track, and it will no doubt pummel you into submission without mercy. Of course, you won’t mind. The final offering on here is ‘American Bomb Song’ and it certainly drops hard with a scathing instrumental experiment that shows just how varied and valid 16Volt are within the context of modern alternative music. A number of different emotions and textures are explored without words and it’s an unexpected but effective ending to the disk.

You shouldn’t ignore this band if you like affecting heavy music sprinkled with electro and brilliant hooks. In fact, the Volt could become your new favourite band. This album features some fantastic guest spots including programming from Tim Skold (Marilyn Manson) Jeremy Inkel (Left Spine Down), and Sean Payne (Cyanotic) alongside a few contributions from other notable Industrial celebs. In summary you really can’t go wrong with this record – it’s some of the best rock with bleeps that you can buy.