This then, is the inaugural Constellations Festival in Leeds. It’s a Sunday all-dayer across three rooms in the Leeds University Student Union and at times it’s a very “hip” affair, but mostly it is just a perfect way to punctuate a chilly November weekend. 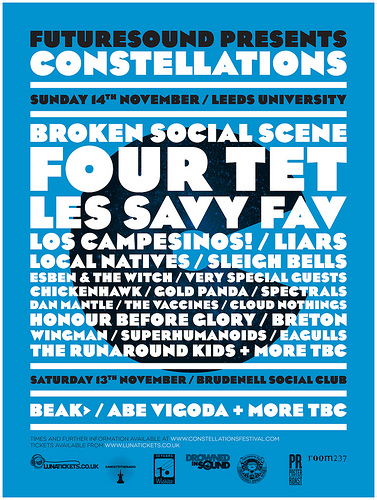 This then, is the inaugural Constellations Festival in Leeds. It’s a Sunday all-dayer across three rooms in the Leeds University Student Union and at times it’s a very “hip” affair, but mostly it is just a perfect way to punctuate a chilly November weekend.

First up are Honour Before Glory, who play a very slow burning, creeping indie rock set that shows off their post-hardcore leanings in the heavier moments. The sextet’s expansive sound fills the Refectory, swirling out over everyone’s heads. At the beginning of their performance the room is half-empty, but by the end it has (surprisingly, considering how early it is) filled out. Honour Before Glory are almost offensively good, far too good to be the first band on stage.

After some Fleet Foxes-inspired acapella moves, Dog is Dead launch into the most impressive Mystery Jets impression that we’ve ever heard. So, as you can imagine we’d almost written them off as a bunch of perfectly coiffed no-substance hipsters when it happened: they got good. The band breaks out a selection of perfect pop songs and reintroduces the vocal harmonies they opened with, layering them over the songs in a perfect fashion. Oh yeah, nice move having a saxophonist, guys. Seriously, in our book that is very cool.

After that, we leave the Mine stage to go see Sky Larkin in the Refectory. Armed with, arguably the hardest working, most enthusiastic drummer in rock ‘n’ roll, the three-piece take to the stage and turn out some perfect punky, spiky indie-pop music. Sounding at times like a less jerky Johnny Foreigner and they seem infinitely proud to be playing such a fantastic gig in their home town. Indeed, their enthusiasm is contagious. This set is the point at which Constellations stops being a great festival. After this, Constellations becomes something special.

Over in Stylus, Liars come on-stage with two drummers and no guitars. They proceed to do some droning, percussive thing which they then swap out for some furious garage rock with added keyboards. There’s a bit of an over-reliance on electro-atmospherics that feels too gimmicky and does nothing for us here, so we return to Mine where Cloud Nothings are playing some schizophrenic, indie-guitar rock. It’s mostly harmless and not particularly ear-catching.

Back in the main room, Local Natives have already started their set. At times they get a little bit percussion-happy (maracas, anyone)? It’s a huge noise, brilliantly deployed and rounded out with more Fleet Foxes-style group vocals. This multiple drummer thing is fast becoming a cliché, but you’d be hard pressed to find anything else with Local Native’s sound to actually complain about.

In the Mine, The Vaccines walk on-stage unceremoniously, play some songs and then leave. However, during their breakneck set, we catch a glimpse of that rarest creature in its natural habitat: pure un-adulterated rock ‘n’ roll. The band obviously want to downplay the hype, but there’s something inexplicably great about them that you can’t place. They write such straight-forward, no-nonsense pop songs and barrel through them with an effortless sense of cool. It’s infectious and they sound like the Jesus And Mary Chain covering Ramones songs. Every single song sounds like a sixties’ pop track, awash with a big frickin’ wall of fuzz that seems to be coming from everywhere, and nowhere at the very same time.

Meanwhile, back in the Refectory, Los Campesinos! are about fifteen minutes late on stage, still tuning up. When they do get on, Gareth Campesinos! is infinitely apologetic, promising that they won’t waste time tuning guitars between songs, thanking an “incredibly patient” audience and explaining that Kevin Drew had wrangled them five minutes more time on stage. They fly through their set with songs overlapping and spilling into each other in a way that you’d expect to be cramped. Instead the songs flow together perfectly, which suits their cacophonous, frenzied style. Los Campesinos! play a nearly flawless set of angst-riddled pop songs: the newer, lyrically darker ones sit perfectly next to the older classics like ‘We are Beautiful, We are Doomed.’ And ‘You! Me! Dancing!’ It feels weird to describe songs that are only three-years-old as classic, but if you could’ve seen the crowd singing along you’d know that they are.

Few bands can justify having more than five members on-stage at once: one is Los Camp! and the other is the band that Gareth Campesinos! introduces as “the next Los Campesinos!”

After virtually no set-up time, Broken Social Scene emerge and thrash through their first song, which Kevin Drew (lead singer, guitarist and de facto band-leader) announced to be their soundcheck. As is the norm with Broken Social Scene, the stage is crowded with members, swapping instruments and vocal duties. The set takes in all of the obvious landmarks from their last three albums proper and every song is a shining example of their collaborative and multi-textural approach to song writing. Having four guitarists at once never made so much sense before.

About halfway through, Kevin Drew halts proceedings to bring out a special guest. It’s only Johnny Marr! Obviously, Johnny Marr is a legend, but rather superfluously riffs his way through ‘Cause = Time’ then wanders backstage. It is a brilliant, shocking moment that you hope will become the type of thing that Constellations becomes famous for.

For most of the gig, Lisa Lobsinger has been hiding at the back of the stage, and when she emerges from behind a keyboard to sing, you wonder why her vocals are so criminally underused. Her voice on ‘Forgiveness Rock Record’ track ‘All To All’ are jawdroppingly great and (this is only a slight exaggeration, but) it feels like time has stopped when she sang the most blissful version of ‘Anthems for a Seventeen Year-Old Girl’ we’ve ever heard.

With songs that are expansive, anthemic and occasionally sprawling, but never over-long, Broken Social Scene are easily one of the most accomplished and unsung indie bands of our generation. It’s the perfect end to a fantastic first Constellations Festival which, aside from some completely obvious scheduling clashes, has been great. If the first one is anything to go by it’s definitely a festival to watch out for.