DarkDriveClinic is legendary producer John Fryer and angel-voiced Rebecca Coseboom, with the occasional input of guitarist Tom Berger. And when we say legendary producer, we mean legendary. If you haven’t heard of John Fryer, you’re going to wonder why the hell not when you know what he’s been involved in creating. He has worked with Depeche Mode, Cocteau Twins and Nine Inch Nails, and helped to bring the goth and industrial genres to the forefront of alternative music for years. Cool. 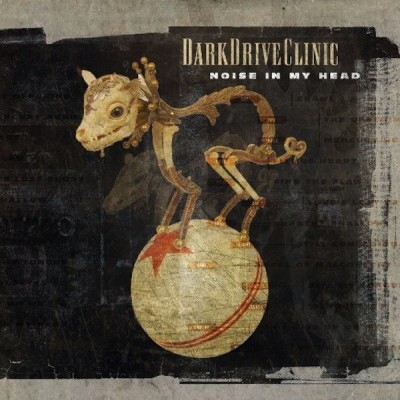 We could reel off all the bands he’s worked with, but we would be here ‘til the end of time. Having worked on these songs for the better part of his career, Fryer finally found his missing element – a delicate, emotive female vocalist; Rebecca Coseboom of Stripmall Architecture connected with Fryer on two separate counts before this collab and ended up being the perfect vocalist for all of his tracks.

The calibre of the work that Fryer has previously worked on has set the standards very high indeed. This album, then, promises great things, and for the most part, delivers. Dark, sultry guitars interweave with heavier, more aggressive sounds and Coseboom’s ethereal yet powerful voice resonates throughout the entire album. Heavy enough to keep the hardcore industrial fan interested, but the mid-tempo pace of the songs would entice a new-comer. There are a few surprises in there too, like the sax in the middle of ‘Love’s Lost Cross’ that keeps you on your toes.

With regards to standout tracks, ‘Noise In My Head’ opens with ‘Crawl’, an instrumental that sets an atmospheric tone without giving too much away. Next, we have ‘The Offering’, a song in which Coseboom’s vocals captures you in their penetrating, poignant way and holds you until the end of the LP. ‘Litmus Heart’ is one of the highlights of the album. It starts with the crackle of vinyl and ends up a catchy melody with an industrial beat that’ll have you singing along and bobbing your head.

A more aggressive side comes to the fore with ‘Still Contagious’ as a fast beat and lyrics like “bad little girls get sent away/they don’t come back/they are made to pay” will have you irresistibly singing it at an inappropriate moment in days to come. ‘Angel Of Malcontent’ starts as a slow one, with Cosebloom’s vocals reminiscent of Shirley Manson of Garbage lulling you into a false sense of security. A barrage of drums momentarily break the dreaminess of the rest of the track, but soon we return to the fevered “oohs” and the picked guitar. ‘Bite My Tongue’ is a slower electro-pop type number, but one with a darker edge; the edge comes with the spiky backbone of the drums and the gritty guitars that interject on occasion.

The list of standout tracks could include the whole album, as each has something to offer. If we were being really “finicky” (like that one?) we could say that there is no real experimentation outside of goth and industrial here, but, frankly, we don’t want to focus on that; this is a must-listen for any card-carrying fan of the aforementioned styles.