Day Of The Sirens – ‘A Kiss From NYX’

This material is the follow-up to Day Of The Sirens’ 2010 debut EP ‘Don’t Expect A Rescue’ and single ‘Alois’. In a relatively short period of time (they formed in 2009 – aww) the lads from Colchester have raised their profile with an addictive brand of spiteful alternative rock. 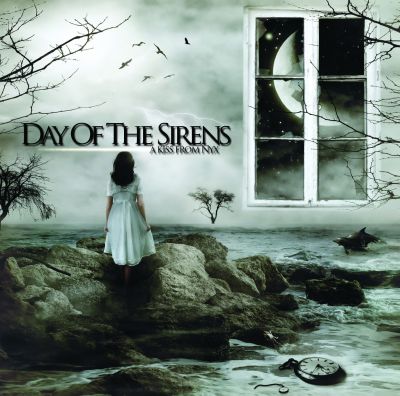 This is good solid music in the vein of Alexisonfire, Escape The Fate and the now-defunct Finch. Whilst not the most innovative act out there at the moment, this is a proud second offering with a lot of promise. At times it sounds so American it hurts, but that’s neither a good or a bad thing.

Singer Jack Fox has a powerful set of pipes on him, and these are ably backed up by the occasional gang vocal from the rest of the band (not overdone, unlike some other bands in this scene). Chris Morley’s guitars provide the right crunch and beef needed, and as a backing vocalist he puts effort into harmonising with Fox. Tommy Hall’s bass is a rumbling beast which holds the guitar and drums (courtesy of a very skilled Xavi Carter). It works together really well, and they can certainly play. Technically there is nothing wrong with it whatsoever.

There are only five tracks in all on this EP, opener ‘Home Is A Working Title’ has all of the most positive elements for a screamo song without being overly pretentious or beholden to their influences. ‘211 Kramer’ meanwhile is an uplifting piece as well, though it sounds more like the band hail from California and not Colchester. ‘Dark Days Part One’ could very well become a classic for the band, with its uplifting hooks and thick rhythm section. ‘We Are Our Memories’ reminds this scribe a lot of the aforementioned Finch, and it’s a brooding, building emotional beast. Finally, closer ‘Dark Days Part Two’ rounds things off nicely, displaying pure hardcore energy throughout and occasionally skewing off into energetic emo territory. And, for those lucky enough to grab a copy of this when it is released next month, there’s a hidden track as well. It’s worth a listen.

This is a very self-assured and confident EP, and shows that the band have a more savvy knowledge of what works than they should at this relatively early stage in their careers. Highly recommended if you like your music served up with a side-order of emotion and smothered in ketchup with a melodic twang. These guys are on the verge of something massive.