Digicore have arrived on the international industrial music scene with this, a full-on, straight ahead “cyberpunk” assault on your senses… 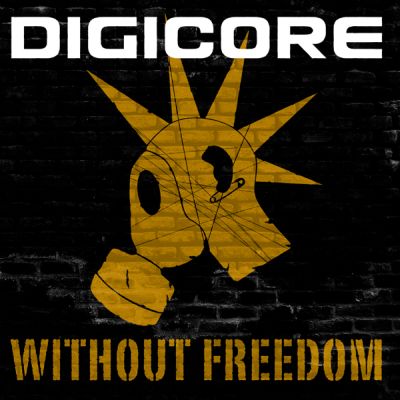 We know what you are thinking, cyberpunk is a very select sub-genre. To our knowledge, there has only been a few acts worthy of note – one might name-drop Pitchshifter and The Prodigy as prime examples. So, could Digicore join these bands in being held in high-regard within this genre-bending (and mind-boggling) category? The answer is, refreshingly, yes. We’re not saying that this is the most ground-breaking or original of records, but an extremely strong effort it is. ‘Without Freedom’ has some great raw, stripped down elements on the whole, and these delightful parts occasionally make themselves known amongst the bat****-crazy blast-beats and full on metallic guitar attacks.

The band remains determined throughout with its powerful aural assault, from the opening ‘Matrix’ sample that introduces the defiant ‘We Will Protect You’, through the Atari Teenage Riot-influenced ‘Obey!’, to the full-on rage of ‘Core’s anti-anthem ‘Tear It Up’, via the stripped down, almost reflective ‘Parasite’. The listener is left to rest after suffering a bloody nose from the final knockout blow that is ‘Your World Is A lie”, it is clear that, if given the chance, Digicore will change what you think about industrial music in 2011 and become ambassadors of the future for the “hybrid” genre that melds electronic and rock sounds so perfectly and has previously been championed by the likes of Celldweller and Refused.