Simply put, this is a very nice piece of work In Strict Confidence have done. With the single, ‘My Despair’ already doing well to awake curiosity in preparation for this record which was released earlier in the year. Of course, the band follows the actual trend that drives on the highway of danceable electronic sounds together with industrial rock. 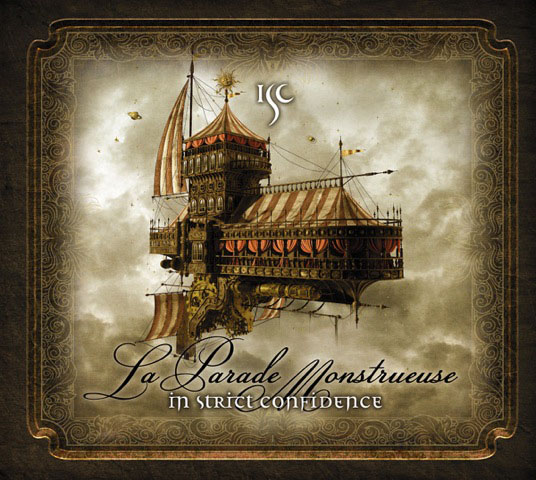 The receipt works to distil an elixir out of Rammstein, Marilyn Manson, Depeche Mode, Kraftwerk and Prodigy. Many will not immediately associate In Strict Confidence with these acts but this band are able to convince with a great feeling for melodies. And, their male vocalist has a distinctive, hoarse voice which doesn’t need any effects to break the clean digital production with snotty personality. ‘Silver Bullets’ rocks hard straight away and is a catchy ballad based on good work from new guitarist HayDee Sparks. ‘Set Me Free’ is in English and German language and it starts with a sonorous voice; the masculine sex-appeal gets tenderly stroked in the refrain by a seductive female backing vocal. And yes: there are a lot of ideas which keep the album alive. ‘This Is All’ owns a brilliant rhythm with a deep bass and testosterone-filled climax. This is followed by a real ballad – accompanied by piano, Dennis Ostermann gets close to the borders of kitsch gothic music. Nevertheless it sounds fine. Listening deeper to the song’s lyric, this track isn’t that soft and smooth, because it’s about somebody standing at the abyss in which he hopes to fall and burn his wounds. These feelings find their contrast in the next track; ‘Snow White’ is a piece of electronic industrial that’s far too bulky to relax easily in the living room.

Meanwhile, ‘I Surrender’ has one of these strong beginnings which invites the listener to dance, but develops in a more sensitive way with many ideas that it seems to be more convenient to just sit and take it in. On ‘Schwarzes Licht’ the new co-vocalist Nina de Lianin takes the mic. This song tries to amalgamate electronic gloominess with catchy wholesomeness, but it doesn’t function very well. The song falls out of the balance and can’t find the right direction. ‘Golden Gate’ is the last track and is much slower than anything else on here, but the mastermind Dennis presents with his deep voice substantial presence and a powerful finish to the whole production.