We last saw The Pennsylvania three-piece on their first tour of these shores back in late 2008 at a slightly smaller venue in Leeds. Honestly, it was immense. Fantastic support which came from the wonderful Middle Class Rut, helped it out. The gig, despite the organic “electro” feel on Innerpartysystem’s music, somehow retained a sense of the DIY. The small venue was packed out and the sound was huge and full. Tonight, however is a slightly different story. The band perform with admirable energy, an obvious love for performance shining through, and a true appreciation for their fans is evident in every note. But something doesn’t quite fit. 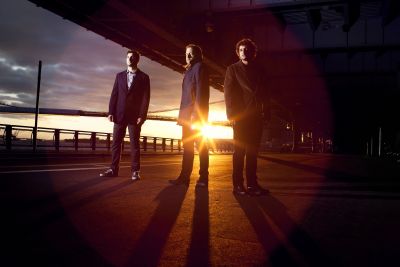 The venue is a good one, parked on a back street not too far away from Old Street station, it boasts being an art space as one of its many functions. Almost warehouse like inside, the sound is big, but looses a little impact – perhaps due to the space being perhaps only half full.

Opening with ‘Money Makes The World Go Round’ from the latest ‘American Trash’ EP, the first thing we notice is the slightly cut down line-up from the previous gig. True, the new EP doesn’t seem to contain much in the way of guitars, so we expect their use to be intermittent through the set, probably on older tracks only. We were actually wrong. The three Americans hold their places for the night, Patrick playing synth through much of the gig and only stepping away for perhaps two or three whole songs to concentrate soley on the vocals. That said, he is a fantastic frontman both behind a synth and at the front on top of the crowd (where he belongs). If I remember correctly, Kris Barman did step up on guitars as well as synths back in 2008, however this time there isn’t a single guitar in sight – we have to admit a smidgen of disappointment. We really thought that the heavier use of live guitars than on record really helped fill out the band’s sound and led to the raw edge we saw previously.

Jared’s acoustic, and very heavy, drums still help out in this department, enticing the young crowd into an odd pop-punk-esque frenzy of hypnotic hopping. So, the band storm through ‘Die Tonight, Live Forever’ with a solid almost rampant pace. They move quickly on to what seemed to be cut down version of ‘And Together’, before moving swiftly into ‘Heart On Fire’. Which, we have to say, is the big sufferer from the lack of guitars. It doesn’t sound bad – it just doesn’t sound as big as it should.

Things chill out a little through ‘Squid’ before breaking out the masterpiece of their signature electro-rock sound that is ‘Last Night In Brooklyn’. The synths sound huge, the feeling captured on record is flung out to the live audience ten-fold. For us this was the highlight of the set, closely followed by set finisher – ‘American Trash’

The band carry on with few words uttered between songs, playing the anthemic ‘Obsession’ to a chorus line of love-lorn teenagers chanting the lyrics back at the band in a crazed harmony, encompassing a multitude of pitch and tone that somehow just works so well on this occasion.

Oddly at this point, things go quiet. A few words from Patrick and then the band breaks into a rendition of The Chemical Brothers ‘Block Rockin’ Beats’.

After a short break, the band come on and tell of their hate of playing encores, despite this they play, as though pandering to the screams of the front row, the now classic ‘Don’t Stop’.

The band show an expert attitude towards playing live. Yes it’s electronic, but that doesn’t mean it has to be 85% backing track – and with IPS it isn’t. Parts are chopped and re-sampled, the synths have an open, almost out of the mix, sound to them. The beats are harsh and tight. There is a certain amount of ad-lib to their live shows, which catapults the band’s sound into space when transferred into a live arena. A unique band on today’s music scene. Playing everything from opening slots for Pendulum to DJ slots at illegal warehouse parties.

With all of this, the IPS sound is quickly evolving, naturally moving further into electronic territory while ditching many of the rock elements that initially made them popular with the younger crowds. Despite this, the aesthetic is still there in the music, aggressive and honest in its delivery. Provocative lyrics, room-shaking bass and a noteworthy hybrid live show.