LA based electronic rock band Julien-K have music credentials in spades, including ex-Orgy members, production experience with the likes of Mindless Self Indulgence and Danzig and tours with Korn, to name drop a few. Their debut album ‘Death to Analog’ has been a few years in the making but was finally released in March with high expectations – tracks released for download through their website before the album was completed quickly expanded their fan base and the anticipation of the album. 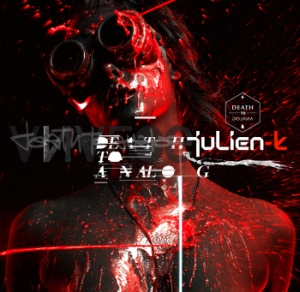 Julien-K’s influences are clear, with each track taking something from a great band or genre. Opening title track ‘Death To Analog‘ has a distinct style, remeniscent of Stabbing Westward, while other tracks have chunks of classic eighties synth-pop, this is dark dance music at it’s best – like a James Bond theme for the electric generation, powerful and anthemic. ‘Someday Soon‘ experiements with layering to produce a great big-boots dance track while ‘Kick The Bass‘ has a more classic gothic feel but with an electro injection.
Other tracks use heavy distortion and synthed vocls to create a futuristic and apocalyptic feel while ‘Systeme de Sexe‘ is a cross between sleazy NIN and Depeche Mode, who are clearly a large influence on the band, ‘Spiral‘ is a return to a more pop-focussed synth and ‘Never Say Never‘ utilises electronica guitars for a rockier edge and more depth. The tenth album track ‘Dystopian Girl‘ is very Gary Numan, in his more recent incarnation and while is well put together and catchy, like all the other tracks, is similar to too many other things to stand out on it’s own. Lead vocalist Shuck wants Julien-K to make a difference in the scene “I don’t give a shit about sales. I give a shit about making a wave”, which Death To Analog may well do, but to those of us who were around when all their influences were making waves it will either impress by combining all the best bits with a new edge or disappoint by sounding too much like our heroes.
***
For more information, visit the band’s Myspace and website.
View the video for ‘Kick The Bass’ below:
&feature=PlayList&p=CED2049D91E9C613&index=7