Kommand + Kontrol are a relatively new industrial-dark-electro band from the UK. The two core members are Angus Hobbs and David Chapman who are both well respected Industrial and alternative DJs (DJ Virus and Terminal respectively). After performing for the first time under the moniker K+K at Club Antichrist near the end of 2007, they have played across the country. Now they are unleashing their first E.P – ‘Dead Ground Ahead’. 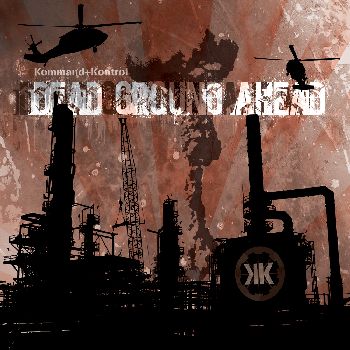 The instantly noticeable thing about K+K‘s style, is that the majority of their songs appear to be designed so they are easily mixable during DJ’s sets. ‘Model Citizen’ is a perfect example of this. The intro feels quite barren, with just a simple repeating high-pitched pulse. This is so the DJ has time to beat match before the song actually starts. The song slides smoothly between electro beats and a dark guitar riff but overall it still just feels slightly amateurish in its execution.

‘Not A Murder’, on the other hand is a stylish display. Starting with a Rotorsand-esque synth it builds, pushing you forward with force before dropping out for a quick sample. When the synth returns; it comes back with a simple, yet ridiculously effective beats. Each time the music drops out to play a different sample it returns with a more and more frenzied mix of synths and live drums. Each component is simplistic, but together it sounds aggressive and passionate creating something ready to be played in clubs across the country.

There is a decent amount of samples used on this album and the best use of them is on ‘Television’ which contains samples from the 1983 cult film ‘Videodrome’. The song itself sounds like it could be used in a more modern version of the film. It has a strange sci-fi edge to the mixed beats. What is unfortunate though is that the levels aren’t correctly balanced, with the off-beat drums overwhelming the other sounds.

Although there is one very good club track, the other songs on this EP come off as being not quite right at various points. They are lacking some edge and something to make them stand out from the crowd. A lot of this material will wash over you in waves, never really pulling you in with it. There is potential here and advancements can clearly be made to this already well established formula. Hopefully what K+K will do, is realise where their genuine strengths are, because when they are strong, they definitely have something defining. Let’s hope their next release takes them in the right direction.