It’s two in the afternoon on an agreeable summer’s day in East London’s Victoria Park. The somewhat vaudevillian sounds of louchely fantastic art-poppers Citizens! are washing over a bustling crowd of roughly the coolest people you’ve ever witnessed. It’s your correspondent’s first taste of Field Day 2012, and it’s rather an intoxicating one. 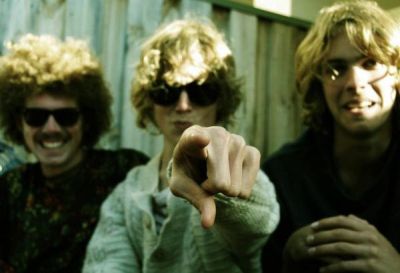 Citizens! are pretty amazing for starters, and their triumphant set finale featuring stand-out songs ‘Girlfriend’ and ‘True Romance’ goes a long way towards confirming that they’re going to be one of the most important bands to emerge this year. Shortly thereafter and on the other side of the arena, hotly-tipped classic rock-revivalists Pond (pictured) are stepping out onto the Eat Your Own stage – the festival’s largest. Their slightly nervous body language suggests that this gig is a pretty big deal for them, and their steadily accumulating audience is allegedly the largest they’ve ever performed in front of. Unsurprisingly then, Pond are a little bunched up on stage and a little static and they could probably do to upscale their performance a touch to complement their rather massive sounding Zepellinian music. And let’s be clear. Musically, Pond have a lot going for them, with big feel-good riffs and the sort of California circa-1990 guitar jangle that’s destined to win the hearts and minds of hipsters across the globe. Having said that, it’s hard to take a band seriously when one of them totes a Kiss t-shirt whilst they play a chorus that’s practically identical to that of ‘God Gave Rock and Roll to You’. Maybe the sartorial decision was a wittily self-aware one. Or maybe not. Either way, Pond walk a fine line between pastiche and plagiarism. All good fun at any rate.

Next stop is the Laneway Festival stage for the wonderful Errors. This Scottish instrumental outfit has been refining their own brand of mathy electro for a fair while now. Evidently they’re getting it down to a tee, and there’s a real buzz throughout the packed-out tent as they take start. Their newer songs are sounding expansive and synth-heavy. They’re respectfully received, though brasher tracks from previous albums such as the gloriously dancey ‘Supertribe’ seem to be what everyone’s here for, and understandably so. The trouble with really good festival lineups is that really good bands often end up playing at the same time as other bands who are also really good. The irresistible arrival of Liars on the Eat Your Own Stage halfway through Errors’ set is a pretty prime example of this, and it’s with mingled excitement and regret that we switch stages.

Thankfully, Liars justify our decision by being utterly brilliant. Masochistically bedecked in suits, the experimental trio start off with a clutch of slow, brooding songs characterised by dance-flavoured synths and darkly primal vocals. By now the sun’s at its zenith and there’s something suitably languid and desolate about the bulk of the performance. It’s pretty hypnotic stuff, but never boring, and as the set progresses the emphasis shifts from eerie experimentalism to massive guitar sounds and disco hi-hats. It’s been a captivating journey through atmospheres and a true festival highlight. Thanks, Liars.

A wee bit of a change of genre now as we head for the Bugged Out stage where Hudson Mohawke is due to take the floor. The Scotsman’s euphoric dance music, whilst in itself pretty enjoyable, seems ill-suited to its surroundings, and it proves hard to feel enthusiastic about occasionally glimpsing the much-feted DJ bobbing around amidst plumes of dry ice as restless revellers mill about like a colony of insects. The experience is quite uncomfortable and disappointingly impersonal. It’d probably by fun to see Hudson Mohawke DJ at a club. Just not here. To a degree, the same goes for the next act we catch, Metronomy. Technically, their set is flawless, and tracks such as spacey hit ‘The Bay’ and new-rave classic ‘You Could Easily Have Me’ provide moments to savour. It just feels like the whole thing’s a little too polished. Metronomy have been touring in support of their latest album ‘The English Riviera’ for a long time now, and unfortunately it shows. A friend hits the nail on the head when he says he feels like “he’s watching the whole set on TV”. The songs are there and so is the musicianship, but the spring seems to have left this band’s step for the time being. Up next are Beirut whose brassy tweegasm of a set does little to lighten the mood. It starts to rain and the sense of a lull is complete.

Fortunately, there’s a lot about Field Day that has the strength to lift the nonplussed festival-goer’s spirits, and having sampled some truly mind-blowing jerk chicken and partaken in a pretty large-scale organised hay fight/disco, we start to feel just about as excited as anyone who’s about to see Franz Ferdinand live ought to feel. Considerably excited that is. A fairly whopping crowd begins to assemble in spite of the building rain and the atmosphere in the arena is on a skyward trajectory once again. Three albums (almost four in fact) into their career, and Franz Ferdinand are still clearly a pretty big draw. To rapturous applause they take the stage and burst into mid-noughties indie-disco classic ‘Michael’, unleashing a wave of enthusiasm and jubilance amongst the masses that defies the cool objectivism that has characterised most audiences throughout the rest of the event. Their set takes in an array of some of the most noteworthy songs from the band’s remarkably noteworthy career, from more obscure numbers ‘Jacqueline’ and ‘Tell Her Tonight’ to chart-slaying karaoke staples ‘Take Me Out’ and ‘No You Girls’. It’s quite a spectacle as Franz high-kick stomp and strut against a background of vivid and occasionally humorous projections depicting a range of images from retro video games to a bowl of shrivelling strawberries, and in spite of the now driving rain, a true sense of joyous abandon has finally settled upon Field Day 2012.

A euphoric highlight comes in the form of a bass-synth-driven medley of FF original ‘Can’t Stop Feeling’ and soaring Donna Summer classic ‘I Feel Love’, which inspires everyone to stop jumping around for a few minutes and start actually dancing – quite a feat given how static the crowd’s been at the main stage throughout much of the day. It’s an indie-electro moment par excellence and represents the festival’s zenith. There are one or two slip-ups during the remainder of the set – forgotten lyrics and off-kilter notes – but these are few and far between, are quickly amended, and actually serve to bolster the humanity and charm of this deeply likeable band. There are a few new songs on show, the best of which are retro-stompers ‘Right Thoughts’ and ‘Trees & Animals’, both well worth a listen online. Tonight’s headliners close out the festival with a frenetic rendition of ‘This Fire’ as flashing yellow lights pick out beams of raindrops in the sky and the muddy ground shakes from the pounding of feet. It’s a riotous end to a wonderful set and a flavourful day’s entertainment. It’s good to have you back Franz Ferdinand. And Field Day, see you next year.