Upon arriving at The Duchess to watch the industrial-pop legends Nitzer Ebb this evening, we are pleased to see a decent-sized crowd gathered around the stage to witness this cult act (who have been going since the early 80s, and perfected the crossover between rock, pop and electronic music). Before that though, we are treated to some credible local(ish) talent. 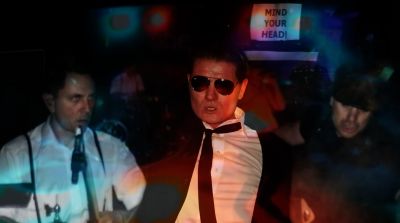 Indeed, Leeds’ Alice Moving Under Skies pull together a striking set of emotive electro-goth songs that help to warm up the curious crowd. Their surprisingly polished sound recalls the decadence of Faith And The Muse with some raw guitars added in for good measure.

Follow-up act Zeitgeist Zero is certainly one of the hardest working groups on the UK goth scene. The strength of this band comes in their ability to evolve and change beyond the trad-goth sound to create something far deeper and more emotive. Over the last few years they’ve found their ultimate mix of musical influences – a pinch of Garbage, a dash of The Cramps and a welcome smidge of Snake River Conspiracy. Their depth of live experience is now such that the four-piece can pull audiences from all over the globe with their dark, rockabilly-esque anthems for the damned and disillusioned. Tonight, in front of a crowd of dedicated followers from the region, Zero’s electro-rock stompers like ‘Heart To Black’ and ‘Big Bad Wolf’ sound powerful and really stick as some of unit’s best work both live and on record.

After a short wait, the headliners Nitzer Ebb take to the unusually small (for them, anyway) stage. Their set this evening is made up of primarily new tracks from their current album, ‘Industrial Complex’. Songs like ‘Payroll’ and ‘Hit You Back’ sound vicious and hard-hitting showing the band’s obvious lean towards rockier influences these days. Similarly, established hits like ‘Let Your Body Learn’ and ‘Control I’m Here’ sound ever-relevant and anthemic making The Duchess feel like one of the arenas Ebb are currently selling out on tour with their buddies Depeche Mode. Tonight was our first experience of Nitzer and it’s no exaggeration to say that we were blown away by their style and showmanship, both collectively and individually. Nitzer Ebb make industrial and goth music sound commercially accessible, look fun and hit hard – within this scene, it really doesn’t get any better.