The Smashing Pumpkins are a special band. No doubt. Many will say that they are life-changing. For this writer the Chicago natives had (and are still capable of having) that type of impact. That is, of course a lot of pressure to put on any band walking on-stage at Sheffield O2 Academy, but as we (the crowd) sit/stand ready and waiting, we expect the best from a band that is, and has always been one of the best in rock music. 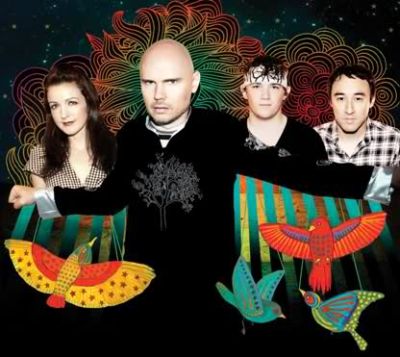 What we get isn’t the best of Smashing Pumpkins (yes, we know it’s not a “best of” tour…), not even close, but a clear shot of where Billy Corgan (chief songwriter and full-time control freak) and his band (including: 21-year-old Mike Byrne on drums, former Veruca Salt bassist Nicole Fiorentino and long-time collaborator Jeff Schroeder [in case you didn’t know or care since Iha, Wretzky, Der Maur and Chamberlain departed]) are right now with their latest ‘Teargarden By Kaleiydescope’ and ‘Oceania’ material. They make shoegazing prog-rock in 2011, and the concentration is on that here and not the catchy and vitriolic music that made them “rawk” genre heavyweights in the first place. As a result, classic powerhouses like ‘Tonight, Tonight’, ‘Today’, ‘The Everlasting Gaze’, ‘Perfect’, ‘1979’ and more recently belters like ‘Tarantula’ and ‘That’s The Way (My Love Is)’ are missing here and one or two of these could perhaps been squished in.

The way they play tonight, technically, is as good as anyone could ever expect from the band, and the new material is something to be proud of, undoubtedly, but there doesn’t seem to be a fair spread of the aforementioned hits here (and of course, those tracks are the ones most long-time and first-time listeners/viewers want), meanwhile, the terrible sound at this Academy venue doesn’t really help our listening experience at all; at times it’s almost impossible to hear the vocals.

Sure, the incorporation of ‘Muzzle’ and other usual suspects from the ‘Mellon Collie And The Infinite Sadness’ days, along with ”Geek U.S.A’ (”Siamese Dream’), ‘I Am One’ (‘Gish’) and ‘Frail And Bedazzled’ (‘Pisces Iscariot’) go down a storm and have people excited with euphoric grins slapped on faces (we have to wait until the encore to get ‘Zero’ and ‘Bullet With The Butterfly Wings’ and see pits start while the rest of this crowd go absolutely batsh** mental). The remainder of the set though, sees the capacity crowd subdued while Billy Corgan has a slight ego-stroking session with his guitar between tracks at various intervals, raising and showing it off to his appreciative (yet, ever so slightly underwhelmed) audience.

We’re not dissing Corgan and co. for championing the new stuff, again, it’s good, but it’s really, really chilled out, and the band don’t really help matters by hardly moving throughout; throughout the whole show, it feels like we are waiting for the band to explode into life and play some proper alt-rock, but that doesn’t happen. Within the live arena in our opinion, ticket buyers just want to feel the energy of a band that they have loved for years, and this stuff doesn’t really carry much in the way of energy, though opener ‘Quasar’ is heavy and starts the mood off nicely before ‘Panopticon’ hypnotises the crowd to a point of standstill. More than likely, this set is the product of Corgan not wanting to have the Pumpkins be seen as a “heritage act” (as detailed in the below interview with O2 Academy TV), but a few more of the fast-paced “big ones” would have been nice tonight.