When the 2-Tone craze emerged into the mainstream in 1979, the UK found itself in a period of economic recession and industrial uncertainty which a newly-elected and polarising Conservative government endeavoured to stabilise. 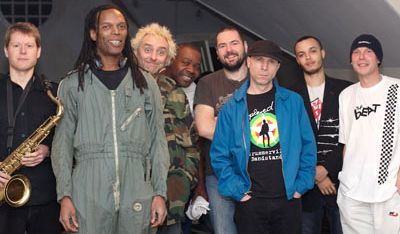 The musical canon of bands like The Beat and their contemporaries held up a mirror to a society at the time from a multi-cultural perspective raw in both energy and anger. You might say a style of music which resonates with the situation the country is in right here, right now.

It’s fair to say The Beat are the main draw for the majority of the audience, many dressed in “rude-boy” outfits and Mod memorabilia, but the two support acts punch their weight with music in the same spirit as the headliners. Fresh from our last encounter with them at the recent Galtres Festival, Hot Fudge kick the evening off, exhibiting the same confident collective sound they mold. A new track ‘Lay Down, Play Dead’ offers a new thrill from bassist Helgi Clayton-McClure with slap bass chords, and George Green’s trumpet stabs providing a sweet complement.

Their set is the band’s last before three of its members depart for university – we learn frontwoman Sophie McDonnell is bound for Leeds, trumpeter George Green shall head to Huddersfield and keyboard player Ed Lawrenson is set for Sheffield. Mid-set, McDonnell addresses the crowd: “It’s been emotional…I love you all!” One hopes it’s not adieu to one of York’s leading live bands.

Copasetics follow with a collection of dub-driven ska-rock tunes which shift pace effortlessly. The heart of the York quintet’s rhythm comes from pacy drums by Tom Halliday and bass provided by new recruit Toop Harris; it may be her third concert as a Copasetic but her strong playing is a real deception away from this fact. The crowd bounce and stomp along in appreciation of the band’s eight-song set, setting the tone for what’s to come. Lead singer Benj Halliday tells the crowd, ‘It’s a pretty exciting gig… I remember dancing when I was 14 to ‘Mirror In The Bathroom'”.

At around 9.45pm, The Beat take to the stage with an ecstatic response from the thronging crowd. This line-up includes original members, vocalist Ranking Roger and drummer Everett Morton, but the whole unit, who have been touring together for a few years now, are highly proficient in recreating the sounds of the band at their peak. The classic singles go down a storm; ‘Mirror In The Bathroom’ and ‘Too Nice To Talk To’ get the most positive response from the floor. Album tracks and more recent songs also evoke cheers and dancing from the audience.

Inspired cover versions of The Clash’s ‘Rock The Casbah’, Prince Buster’s ‘Whine And Grine’, as well as the song that introduced the band to the Top 10, Smokey Robinson and the Miracles’ ‘Tears Of A Clown’ are enthusiastically welcomed. There’s no rendition of ‘Can’t Get Used To Losing You’, one of this writer’s earliest memories of hearing music, but perhaps keeping the crowd buzzed is the right approach for this time and place. The band are beset by technical problems early in the set, but their vow to carry on is embraced – and fulfilled. Ranking Junior’s flawless freestyle toasts are a joy to behold, and the sight of father and son bounding across the stage during instrumental breaks is electrifying.

As the band acknowledge the euphoric crowd’s call for an encore, Ranking Roger swaps T-shirts with a member of the audience before launching into the frenetic ‘Jackpot’. In all, the night is a treat for the rude boys and rude girls who come along; the kinesis all three acts produce in the room is irresistible and proves you really can’t stop The Beat.