CD Review: Mark Wynn – ‘James Dean Makes Me Insecure, Why Does He Have To Be So Shexy’

Those impatient wee mites amongst you, who check out the verdict before they read through our reviews, already know that Mark Wynn has earned himself top marks with his latest effort. So the obvious question dripping from your salivating, and more than a little suspicious tongue, is of course: “Is it really that good, or are we just a bit prejudiced?” 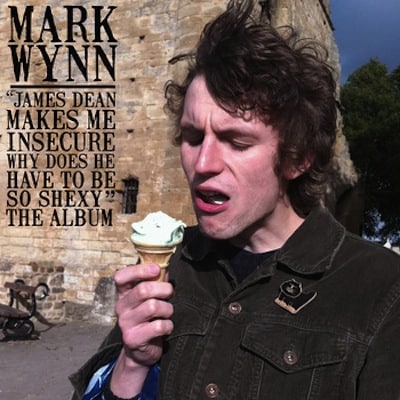 Mark Wynn may be a local York lad, and we here at Soundsphere magazine do like to support local talent as much as possible, but thankfully this album speaks for itself. Now, in the interest of full disclosure, it’s only right to point out a couple of things you probably shouldn’t expect from this release. If the thought of an auto-tuned, and overproduced vocal, so sickly sweet you can develop diabetes just by upping the volume, gets your undies a wee bit damp, this may not be the album for you. If your idea of inventive guitar work is seeing how fast someone can spider their way through a heptatonic scale whilst supporting enough pomposity to flatten an elephant then, once again, perhaps you should give this one a miss. Be warned however – miss this one and you definitely miss out.

Mark Wynn is described as existing somewhere in between the realms of Townes Van Zandt and Mark E Smith, and that’s a reasonable nod in the right direction. He is part acoustic singer-songwriter, part spoken word performer, and entirely worthy of your attention. Think Beans On Toast with a massive shot in the arm of lyrical dexterity, or a likable punk-tinged Mike Skinner without the inflated ego, and you begin to come somewhere close. The best thing to do of course is to see for yourself and sound off in the comments box below with your own (probably far more accurate impressions).

With the twelve tracks on offer here Wynn takes us on a journey of surprising depth and subtle variation. After the raucous ‘Introduction’ the album begins to settle into its shape with ‘Baby Baby’, the morose vocal and lo-fi production juxtaposing the delightfully toe-tappy melody perfectly. If you listened to the artist himself he would most likely tell you, in his typically self-deprecating way, that a lot of his songs sound the same, but it’s partly the similarities between songs on this album that give the work its structure. ‘Henry Miller Filler Song’, and ‘Big Fib Song’ share a certain affinity of tempo and lyrical rhythm, but instead of repetitive the overall effect is one of a natural order to the tracks, one becoming a natural progression from the last.

‘Get Off Song’ and ‘Woolies Please’ again feel like they could be sibling tunes but their kinship gives the impression of a deliberate pairing up of songs by the recording team. Whether this was Mark or producer Sam’s intention, of course, we may never know (although Mark’s admission that both gents decided to give up smoking during the recording period suggests that certain knowledge of intentions may have fallen victim to mood swings and nicotine cravings). To put it bluntly though, intentions are pretty much irrelevant here as the effect is there, and it is one of a series of thematically linked tracks deliberately woven together for the pleasure of your earballs.

There are songs which act as love letters and laments to places and times, there are tales of ladies, and acerbic observations, and everywhere is a characteristic good-humoured wit and intelligence. It’s pretty obvious then what we think of Mark Wynn’s latest selection of bite-sized gloomy gems, so why not have a listen for yourself.

You can sample the album here: http://markwynn.bandcamp.com