Dark electro duo Mesh are back, thank God, and you would be forgiven for forgetting just how good they are – their last album ‘We Collide’ was three years ago and the break seems to have made them even better, if that was possible. 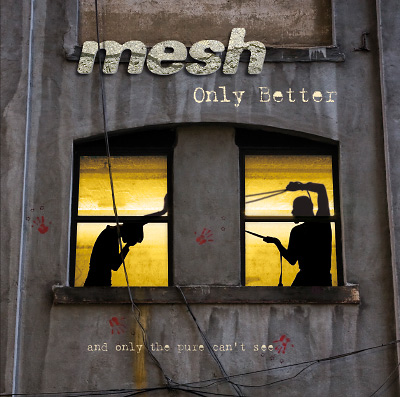 ‘Only Better ‘ is the pre-release single from forthcoming LP ‘A Perfect Solution‘ due in October and is an amazing taster of the album to come. Comprising five tracks – two versions of the single, one remix and two other songs – the single shows off Mesh’s heavier side, a darker edge is evident in these few songs but the unmistakable sound is ever present. The first track is actually called the ‘gritty’ version and it’s true what the press release says, frontman Mark Hockings does have one of the best voices in the genre, melodic and, at times, reminiscent of Dave Gahan in his early days. Soaring synths provide the backing for Hockings‘ lyrics about failed relationships and disappointment – don’t be fooled by the track title, they’re still the same cynical band – with a heavier overlay creating a dark and thought provoking track. The ‘club’ version is more electro, as expected, but retains the sincerity and makes for a very danceable piece.

Exclusive B-side ‘Shattered Glass‘ is an amazing four minutes of angry, gothic electro with an unrelenting synth beat that would make for a club full of black-clad dancing fans. Rockier than the first songs and more aggressive with lyrics like “your lips are cracked and blistered like the faces that you draw” with backing that Gary Numan circa ‘In Vitro‘ would be proud of.

The ‘Alien’ remix of ‘Only Better‘ is an EBM club version, featuring guitars and dance beats and is a refreshing, lighter alternative to the released track and makes way for the piano introduction to ‘Everything I Made‘, This quickly gives way to a dirty, distorted beat perfectly contradicting the smooth, calculated vocals and demonstrates Mesh’s choice to move in a slightly different direction with ‘A Perfect Solution‘ with harder sounds and harsher beats. If this is a taste of what is to come with the album in October the electro community are very lucky indeed.

Check out the promo video below: