Ourfamous Dead are a five piece “Electronicore” band from Leeds. Their debut EP ‘I Am Human’ is about heartbreak and reconciliation… 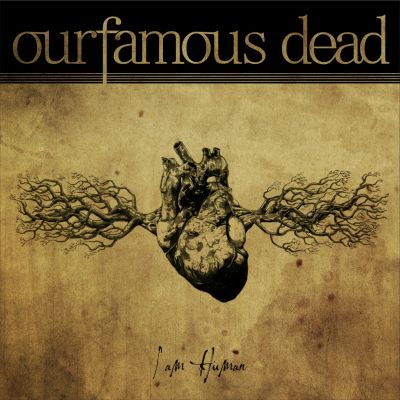 The opening track ‘Ratemyhate’ feels like it is two songs that have just been stuck together. The first half is an aggressive punk anthem with the screaming vocals yelling “I’m f***ing sick of you making me sick”. The fast tempo of the drums, which are matched by the harsh guitar riffs, keep you clenching your fists. The anger contained within the track is somewhat undermined though by the bouncy synthesizer in the background. The second half of the track loses all the anger, even as it keeps up the hectic drum pace, with more melodic vocals.

‘Untitled’ starts with a moving synthesizer dirge, which is unceremoniously dropped for the screeching guitars. The vocals in this track are slightly too fast, which makes it hard for the listener to comprehend what is being said at all times. This is redeemed with perfectly-timed call and response pattern between the lead singer and the backing vocals. The breakdown slows the tempo of the song and revives the bouncy synthesizer that made an appearance in ‘Ratemyhate’. Without missing a beat it leads into a raring guitar solo.

‘The Great And Inevitable (Change)’ is a slower affair than the rest of the EP. The Drums feel as if someone is clapping them out and the vocals are softer. Lyrically it feels like an actual song, instead of the same phrase repeated over and over again. The synth line has been used to great effect in this song. It is part of the song, instead of an afterthought, as it appeared in the first two songs.

Finally, ‘Untitled Pt.2′ brings the pace of the EP to the climax, with the frantic arpeggio synth line. The hollow sounding drums add to the speed of the song. Despite all this the vocals are controlled enough that they are understandable, whilst still giving a sense of urgency. The songs slows down for the breakdown with an unnervingly aggressive guitar riff and crescendos the screaming vocals making a return with great effect.

This EP is technically very good, and they show a lot of promise, but they need some more direction, we feel. At this point it feels as if they have just produced four songs to show off their impressive musicianship as individuals. And, the electronic sound that they claim makes them unique, is not there for half of the EP. If Ourfamous Dead can produce a more congruous-feeling EP next time round, they can, and will become a force to be reckoned with.