For a lot of gig-goers, a rock show becomes a take-no-prisoners battle to get as close to the stage as possible, and everyone else can just get fu**ed; People start shoving before the headliner arrives, and fights break out. This could never happen at a Blue October concert. 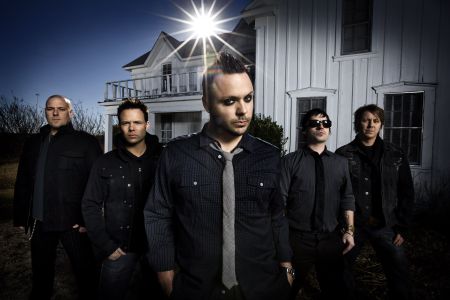 Before they’ve taken to the stage, before they’ve even arrived in the same city, Blue October has united fans with passionate, emotional music that raises spirits as quick as it might break your heart. Tonight, Blue October is at the House of Blues in Boston, Massachusetts for the North East US leg of their ‘Any Man In America’ tour promoting their sixth studio album of the same name.

The first opener for our headliners is Ashleigh Stone, an eclectic singer and keyboardist who definitely reminds us of that weird kid in high school, but whose soft, lovely voice makes us momentarily forget that we’ve been waiting in-line for three hours (yeah, we’re hardcore like that).

The next act is two-man band I Am Dynamite, whose contagious energy affirms the applicability of their name. Despite their delightful moniker, musically, their fusion of pop-punk and rock is neither enthralling nor original, fortunately though, their stage show moves beyond with a liveliness that we cannot help but watch and be affected by.

After a brief set change, the members of Blue October move on to the stage amid a chorus of screams and applause from a charged-up audience. Once on stage, Blue October prove to us why they deserve so many dedicated, supportive fans as lead singer Justin Furstenfeld fearlessly lays his heart open on the floor, and the audience respond to this in the most positive way imaginable.

Of course, Blue October showcase the widely-recognisable Billboard hit track ‘Hate Me’, along with ‘X Amount of Words’ and ‘Into the Ocean’; all from the 2006 hit album ‘Foiled’ that originally placed the act firmly on the nation’s rock music radar. The first song off the new album that we hear tonight is ‘The Feel Again (Stay)’, a desperate plea for understanding from a significant other. Though the song is one of the driving forces on the latest studio album, it can’t compare to the power of Blue October’s delivery of the tune live on-stage. This song also features one of the many intensely moving violin solos from the repertoire of Ryan Delahoussaye; these have become a staple for Blue October compositions, and a breath of fresh air for rock music.

Next on the setlist here is ‘For The Love’, a song of reasoning and passion in the face of pain and fear that reaches every member of the audience with the lines “I do it for my sanity it’s hanging from a thread/I do it for the audience who understands the need/Standing on the stage cut the sh** and let it bleed.” In a touching moment, Ashleigh Stone joins the band on-stage for ‘The Follow Through’, though, we’re honestly not sure that her style of vocal works with the track.

For the live version of ‘The Getting Over It Part’, Blue October shows its not-so-serious side as part of a real highlight as they bring out two back-up drummers who are wearing sparkly capes and Reebok Pump trainers. This one is pure and simply very fun to listen and sing along to, and is driven just as much by Matt Noveskey’s sick bass-line as Jeremy Furstenfeld’s intense drum skills.

Put simply, what makes Blue October shows stand out is the dedicated people on-stage and in the crowd, who are there for the same reason; music is their religion, and they came to the House of Blues to worship.