There are few certainties in life: death, taxes, bad haircuts and what a Marilyn Manson record is going to sound like… 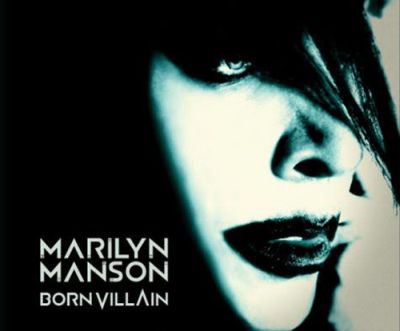 ‘Born Villain’ is no exception. It sticks closely to the template set out on ‘The Golden Age Of Grotesque’ and doesn’t stray (which depending on your opinion of 2007’s ‘Eat Me, Drink Me’ or 2009’s ‘High End Of Low’, is a good thing). Like all of the band’s recent work, what you get here is a decent, but not particularly mind-blowing album.

Creepy, horror movie atmospherics give-way to buzzsaw guitars, over which Manson himself croons or wails, but never screams. It seems his fury has mellowed. In its place is, erm, a curious Prince influence. Obviously, it shines through the noise but it’s there. An nod to eighties pop here, a whispered-sexual-vocal-in-the-verse-followed-by-a-big-chorus-there. It makes sense really, in a kind of god-of-f**k-meets-other-god-of-f**k way. The grandeur robs some of the grit from the noise and leads Manson on the path to Alice Cooper-esque pantomime theatrics, but it’s a role that has always kind of suited him.

The second half of ‘Born Villain’ is where Mazza’s bandmates Twiggy, Chris Vrenna and Fred Sablan help to kick things up with their over-sized boots. The final four tracks are the most compelling. Manson is clearly less in love with the sound of his own voice and the band put in some of their best post-John 5 performances. ‘Murderers Are Getting Prettier Every Day’ starts off with some fuzzy lo-fi guitar stabs, is followed by some pretty violent, death metal drumming and Manson finally spits the poison that he’s capable of. The title track follows and is an update of the acoustic version of ‘The Nobodies’ backed by pseudo-hip-hop beats.

‘Breaking The Same Old Ground’ opens with a children’s music box melody and sounds delightfully reminiscent of Eels’ early work. It’s melancholy, measured and more meditative than Manson has allowed himself to be in recent years. Finally, a review of this album wouldn’t be complete without a comment on that bonus track. A cover of Carly Simon’s ‘You’re So Vain’ featuring Johnny Depp. It is a very typical Manson-ified cover. It sounds exactly how you’d expect it to sound. It’s good, but Manson’s done it before. ‘Tainted Love’ was an inspired choice for a cover. This is ‘Tainted Love’ part two. Eleven years later.

Born Villain is a strong record, but for the most part it is undeniably the sound of a band treading water. All it really boils down to is: are you a diehard Marilyn Manson fan? If so, you’ll love this record. If not, you might be filing it under “non-essential”.