With only a year between them, RevCo follow up last year’s ‘Sex-O Olympic-O‘ with the aptly named ‘Got Cock?‘ On this album the band get cockier, with their tongue-in-cheek attack on the style that the founding members of the band helped to create – it’s no surprise then that they’ve still got Ministry’s Al Jourgensen at the helm and, that this album exudes a immense ‘don’t give a f**k’ attitude, for the most part, it works well. 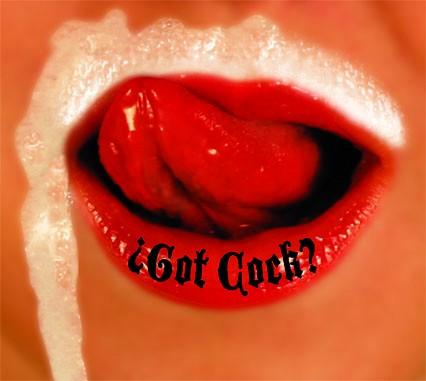 First off on the list is the innuendo-laden ‘Trojan Horse‘ – a slow but catchy track which offers an awesome play-along bass-line and deep vocals from Josh Bradford that pay homage to the classic hair metal bands of the 80s. This effortlessly entertaining theme follows through in ‘Filthy Senoritas‘ with its Joy Division-esque opening and moody goth rhythms of yore. This formula demonstrates that below the playful exterior RevCo are a technically sound, experienced band, of course it helps that The Mission‘s Mark Thwaite is on guitar for this one.

The third offering from ‘Got Cock?‘ is ‘Dykes‘. This is an unbelievably good body-mover of a track. A rough and hard electro-industrial sound that is executed with ease and lets you know Jourgensen is in charge, setting a benchmark for the rest of the album. Meanwhile, ‘Juice‘ carries with it the same heavy load with its brutal beats and visceral style reminiscent to the autumn years of Ministry which makes it a quality head-thrasher of a track.

Next up is ‘Piss Army‘ which helps to keep up the pace going with a four-and-a-half-minute barrage of rough guitars and soaring vocals that sound immense but can soar a little too high and unfortunately this overwhelms other parts of the track completely. Then the album’s down-turn comes with ‘F*** Monkey‘ which sounds exactly like a Ministry remix for Prong – sonically it’s okay and there’s a sufficient amount of chaos embedded in the riffs and beats, but lyrically it lacks the originality that should be present at this point of the album.
Meanwhile, ‘B**ch Addictive‘ has all the traits of an outro-credits song on an 80s teen horror. Punchy guitars and shout-along lyrics make this a joy to listen to. ‘Air Traffic Control‘ follows up with a wicked electro-metal, reverb-fuelled outburst and cheerfully dirty chant-like vocals that build things up only to be let down by a lack-lustre series of verses that would have been better left off of the track completely.

As far as ‘Got Cock?‘ goes it delivers what RevCo does best – fun-industrial-groove with clever, dirty vocals making on the whole it an enjoyable album. If you’re a fan of the current line-up then you’re in for a treat, but if you’re an old-school Revolting Cocks lover then you may be wondering, ‘What the hell happened to my band?’