Rip-roaring onto the scene in York this March are wannabe indie-icons The Amoc (coma backwards) just where do we stand on the band that categorise their sounds, “folk-infused hardcore-indie”, and the attack on the music industry as, “a cultural movement”. We don’t believe that we actually have the authority to decide, but hope that by the close of this article you’ll have a chance to decide for yourself. 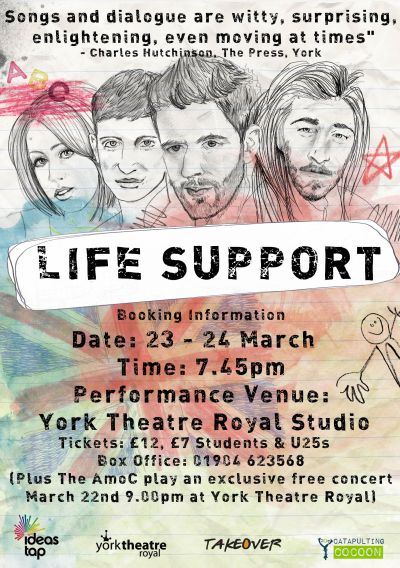 Inspired by the likes of Oasis, Blur and Plan B The Amoc are made up of Keith LightFeather, Damien Brundle, Pete Kelly and Ray (a.k.a. The Human Drumkit). This concept album sees us journey through one month in the life of the group, the formation of the band and the sound, and the most unlikely of inspirations.

‘The Rent Run’, starts things off, and you’d need to be seriously lacking in the hearing department not to spot the obvious homage to 90’s classic ‘Park Life’ (Blur), still, any band that can turn Hugh Grant into a retro anti-hero (via the medium of song) is a winner in our book.

‘Boy What Got’ combines something of a Barat-Doherty-Libertines tone with the attitude of The Who, this is opera for the common man if ever we heard it, “The boy what got the third degree for three whole years”, strikes something of a topical chord for the current Con-Dem attack on our university tuitions fees. Perhaps the most rock ‘n’ roll element of this band is their frank detailing of what has to be the least rock and roll job on earth, working as a primary school teaching assistant; ‘Massive Hands’ taps into the gooey centre of these hard-boiled eggs.

Just when things were wandering to a softer side the ska-punk influence of Madness starts to surface and ‘Wasted’ is at once an anthem for a sozzled city sojourning to a swinging climax of metrosexual measure. You can almost feel the rookie error of assuming one can work on a hangover in the next track ‘Inner State’ – it’s poetic-angst in all its finery, fighting for the crown last worn by The Verve’s ‘The Drug’s Don’t Work’. So, is this a cultural movement? Until this point it’s certainly rallying after anthem-status and the sounds takes quite a tumultuous twist.

‘Baby Bear (The Alphabet Song)’ parodies ‘Twinkle-Twinkle’ and this is all the more eerie when it cracks to a disjointed melancholia one can’t help but think must be influenced by Placebo. still a mild-environmental envelope is being pushed and the song stays with you. ‘Sand Stallion’ steadies the earlier rocking boat in its Mumford-esque tightly woven choral sound, the innate rebellion of this record wrings loud at clear with the poignancy of the songs closing statement “Make no sand stallion out of me!”

The Streets haunt the start of the next song, pulsing with an under-current of wanting to fight, but wishing someone would fight for you, ‘Limp-Wristed Boxer’ is a humble angsty cry for support, beginning to land the punch of the album’s title, a Skinner-esque spoken-word includes the lyrics, “I want baked beans from a tin and sugar puffs from the packet / f**k being a grown up I don’t think I can hack it”. Continuing a theme of longing for rescue, a guest vocal from Lucy Poole (previously unknown to the music industry) a heartfelt anti-love song grasping at a painful love, ‘Buoy’ builds to quite an epic and thrilling climax. Does this voice a generation? The power of story-telling within these songs is a force to be reckoned with. It certainly gives voice to a generation we don’t ever get to hear which is a thrill. Where on earth does one stand on a choice of climax that incorporates Brundle’s much longed for “modicum of the mediteranea”?