The Idol Dead’s new ‘Shooting Star’ record is a disk full of glam-drenched dirty rock music that’ll caress your soul and then bash your face in. The tracks are slick and surprisingly well produced. For example, ‘Babylon’ mixes the brooding impact of Rachel Stamp with the defiant and ultra-heavy stomp of The Wildhearts. On this beast punky beats introduce gargantuan riffage and Polly Phluid’s distinctive  Rotten-meets-Albarn vocal style. Meanwhile title tune ‘Shooting Star’ challenges Velvet Revolver with its stadium-filling addictive qualities. Indeed, the guitars take the lead here while the drums provide a backbone that’s stronger than that Wolverine’s…you know? The bloke off X-Men. 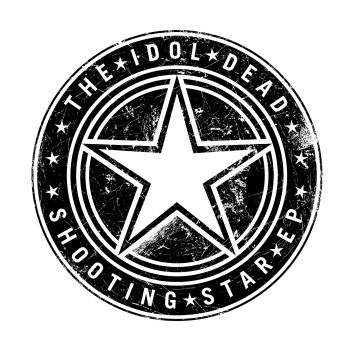 Our standout track on the record is ‘Eye Of The Storm’ and this bad boy showcases a different side to the band. In the opening minutes fittingly enough, there’s a slight Doors-esque twang. The grand nature of this track is emphasised by the soft female vocals that join – it’s a song that builds and builds and demonstrates our constant argument that this lot are one of the standout acts on the northern rock scene. At around two-minutes everything gets a little heavier and the band utilise their 90s influences (see The Chilli Peppers) to produce an emphatic and euphoric rock sound.  ‘She’s So Spooky’ packs an almighty punch and hits hard from the off with dirty, sleazy riffs and jackhammer beats that eclipse the majesty of that Rachel Stamp lot. The great thing about The ID is that their music not only works, but their lyrics are clever and while this is perhaps not the most intellectually-sound example it works and is certainly going to impress new fans by pulling them in with gang vocals and entangling riffs for an almighty wet snog.  Some people might say that this band are trying too hard to recall the glory days of 70s punk and the carefree bombast of 80s glam – we say, what the f**k is wrong with that? There’s a dark wit embedded within tracks like ‘Pretty, Pretty Fu**ed Up’ that will see the band through – they know they’ve got the talent and the potential to be rockstars but they also acknowledge the fun side of making music, which is lost on many bands nowadays. Nice.

There are many other great tunes in the Dead’s catalogue that you need to check out and their sound carries enough weight to see them escape the confines of Leeds next year and tour nationally. The anthemic and energetic nature of ‘I.D.O.L’ will no doubt evoke hundreds of people to chant their name and the classic rock rhythms that infect ‘The Church Of Hate’ will no doubt hook people in with its original ideas and spiteful take on religion – check the massive guitars about three-minutes in – nothing short of glorious.

It’s worth their effort and it’s worth your time – go get down with the Dead.

For fans of: Velvet Revolver, Rachel Stamp, The Wildhearts

Watch the band play live at The Gasworks below: