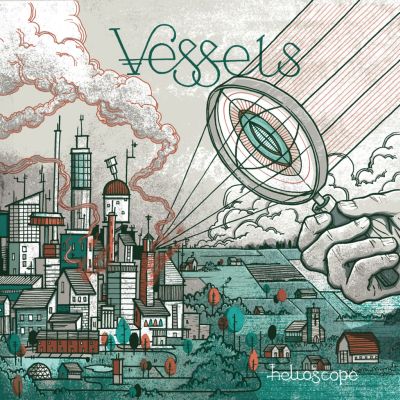 The answer lies within their absolute undeniable mastery of their instruments and individual musical skills. Vessels defy conventional expectations, deploying two drummers and making five of the nine tracks fully instrumental. It’s a bizarre set-up, yet when vocals are present within the densely laden compositions, they’re distilled and refined to the point of sounding like supporting instruments themselves. Lead single, the enigmatically named ‘Meatman, Piano Tuner, Prostitute’ features guest vocals from Stuart Warwick, formally of Jacob’s Stories. Turner’s haunting Thom Yorke-esque voice provides another multi-faceted dimension to the multitude of sound created from such concise and accomplished musicianship, flowing in and out of the instrumental ether with dangerous intent. Vessels have created an album free from narrative, conceptual or thematic constraints, crafting each individual song to function independently from its surrounding tracks. This refreshingly non-linear approach is a salute to the shuffle generation, the young adults accustomed to skipping thousands of songs in random succession on their iPods.

Slow-burning electronic opener ‘Monoform’ distorts and reinterprets conventions of time signatures, rhythm, structure and generic constraints, roaming boldly through dance, techno and sweeping, epic climaxes. The crunching bass of ‘Art Choke’ competes sonically with pounding drums and frenzied synths, operating on the quiet/loud system that is the only identifiable constant throughout the record. The louder moments on the album are balanced beautifully against the melancholic structure of ‘Heal’ which features sound bites of waves breaking, and the multi-layered rhythmic ‘Later Than You Think’.

As a collection, ‘Helioscope’ is a vast, cosmic journey expanding and contorting aurally throughout the 48-minutes of sonic reinvention. The sheer depth of sound and technical flair displayed is jaw-dropping, every twist, every sonic tempo transformation in the musical flow is completely justified. It’s sensitive and calibrated and utterly enthralling.