The ‘Bush Live’ from Roseland DVD is an emotional roller coaster from start to finish for every Bush fan. This DVD was filmed at the Roseland Theatre in Portland, Oregon in 2012, creating excitement and anticipation as the reunion of the band was still fresh in the minds of fans. The energy in this concert is incredible and transports us back to the nineties. With classics such as ‘Machinehead’, ‘Everything Zen’, ‘Comedown’, and ‘Glycerine’ mixed in with songs from the most recent album, ‘The Sea Of Memories’ this DVD contains something for everyone and does not disappoint. 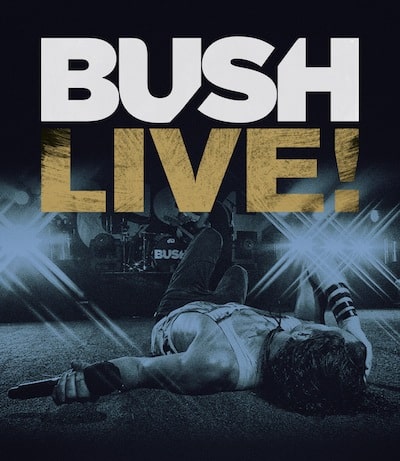 Bush is a band that doesn’t need costumes, gimmicks, props, or even fancy editing to enhance their live performance. The simplicity of this DVD as well as the emotions drawn from the performance are what add to the success of the concert. Knowing that the band formed twenty years ago and has gone through a trying journey makes this DVD that much more spectacular as all members sustain the same high amount of energy from start to finish. With basic effects such as lighting and a subtle fog machine, the performance from the band and the energy from the crowd are what really makes the DVD captivating.

The band maintains a tight and perfectly balanced performance throughout the DVD with impeccable guitar solos from Chris Traynor, backed by driving bass lines from Corey Britz and solid beats from Robin Goodgridge. Throughout, Rossdale’s appreciation for the fans is made evident by several visits to the front row as well as a lap around the balcony of the theatre, closely followed by a security guard. With high-fives and hugs from the audience while the band keeps a calm and tight performance on stage, Rossdale’s genuine gratitude to the fans helps to close the gap between the audience and the band. The combination of these four musicians as well as the visible adoration from the audience makes this a quality DVD that is perfect for any long-time Bush fan. While the band is missing some original members, this DVD is still a perfect example of classic Bush at their finest.