UK dubstep-punk band Subsource are quickly carving their own path in the underground music scene even while being compared to bands such as The Prodigy and Pendulum. This DVD, aptly titled, ‘A Dubumentary’, documents their journey through playing festivals, touring in their “death-trap van”, and losing a front-man while still focusing on the music and performances from the band. 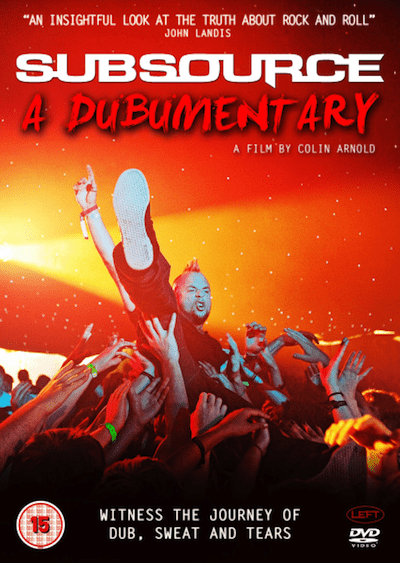 Directed by Colin Arnold, this documentary, while being filmed entirely in black and white follows the band Subsource throughout a series of gigs and festivals across Europe, showing the fans everything from high energy performances to serious discussions among the band. The documentary begins with a performance of ‘Dark Is The New Light’ leading into statements from fans and other musicians praising the vivacious live performances from the band. Scattered with thoughts from the band members describing their love of music and simply, making the audience dance, we’re shown the real passion behind Subsource.

Differing from most music documentaries, we’re not only shown live performances, but also the journey that the band undertakes trying to make it big in the music industry while still maintaining their everyday normal lives. All current members of the band describe how they teach music throughout the week to fund their tours and albums, making apparent their passions for touring and continuing their musical careers. It also combines good times with bad times, showing one of the band’s most confident live members Kimba Mutanda, announcing to the other members that he is leaving the band.

This is a great look into the struggles, adventures, and performances from a band who genuinely perform for the love of the music and their fans. After the loss of a member, shaking the foundations of the band, the documentary continues to film the remaining members on their busy festival season. Lead vocalist and bassist Stuart Henshall discusses how the band will not quit, but will evolve into a new sound with the members that remain.

The high energy from the band as well as the audience members from various gigs and all supporting fans and musicians in this documentary help to create a generally fast paced atmosphere, though it can be quite slow and repetitive at times. While it does take some adjusting of the eyes to handle the monochrome filming along with the flashing lights and frequent montages, this documentary is definitely worth watching for any fan of techno, punk, dubstep, and even aspiring musicians.