Ask anyone to name the greatest TV show of all time and chances are they’ll cite recent success stories like ‘The Wire‘, ‘The Sopranos’, maybe ‘Mad Men’  or at a push, ‘Lost’. But if you are old enough to have seen it when it was first unleashed upon unsuspecting audiences 20 years ago, there can be only one answer: ‘Twin Peaks’. This collection came out last week in the UK. 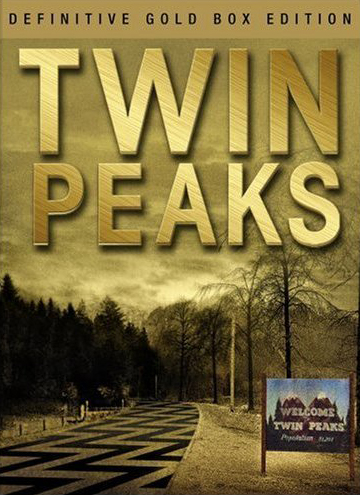 An unholy amalgamation of 80’s teen flick, soap opera melodrama and classic whodunit, all served with a healthy side-order of skin-crawling surrealism,  the show brought cinematic style and arthouse invention crashing into the living room. It paved the way for envelope-pushing, big-budget series like ‘The X-Files’ (David Duchovny even appears here in a rather fabulous minor role) and the recent Depression-era freakshow, ‘Carnivale’. Without David Lynch’s groundbreaking vision, TV today would certainly be much more conservative and predictable. And once you are converted, it may still seem just that . . .

The whole show is kick-started and haunted by the discovery of teen-queen Laura Palmer’s washed-up, plastic-wrapped corpse, with actress Sheryl Lee disturbingly resplendent in drowned blue and glittering silt – as indelible an image as H.R. Giger’s demonic defications of his dead muse.  From there it is up to disarmingly dapper FBI agent Dale Cooper (Kyle McLachlan) to use his ‘unique’ (to say the least) sensibilities and sleuthing to help the police bring peace to their sleepy mountain town.

Lynch himself called upon many muses for his show, most of them tantalizingly fresh to his audience – from plucky Donna to sassy Audrey, adulterous Shelly to exotic Josey, these roles run the gamut from scared, dysfunctional youth to sultry femme fatales, each actress often having to portray their individual character’s journey back and forth across this spectrum. The fact they were relatively unknown lets them inhabit and become their characters entirely. It also had the unfortunate effect of casting a shadow over their subsequent careers – most were so effective here that audiences were inevitably disappointed with and disconnected from their future performances, irrespective of merit. The show was and is that powerful.

Yet here they are forever crystallised, as sweet as Coop’s fetishised cherry pie, their film-noir-inspired appeal still as strong and steamy as a cup of Norma’s deep black ’joe.’ The men – young and old, good and bad – that orbit around them all have their appeal, and every character is given an irresistibly unpredictable arc. The parents in particular – especially Laura’s intensely grief-stricken mother and father, Sarah and Leland – provide some of the show’s most memorable and moving moments.

Everything is given added resonance by Angelo Badalamenti’s remarkable score, able to shift the mood from romance to menace, poignancy to hilarity, with just a few notes or a change in arrangement. The themes are occasionally elevated to transcendental effect by the siren’s call of Julee Cruise’s heartrendingly delicate vocals. The singer even crops up in the show at points, in typically audacious Lynch fashion (as does the director himself, in an especially quirky and entertaining role).

Many have been turned off by the show’s snowballing strangeness and its steadfast refusal to offer comforting resolutions to its many mysteries. The detective aspect of the story encourages audiences to participate in the mystery ourselves, letting us put the pieces together and forcing us to interpret many events however we please. This may seem frustrating for those used to current shows like ‘NCIS’, where each episode is self-contained and everything is explained in the end. ‘Twin Peaks’ is painted on a broader canvas, and while it loses clarity and becomes a little less consistent in the middle of the marathon second season, its overall otherworldly quality is undeniable. It offers all the best that David Lynch has to offer – the small-town seediness of ‘Blue Velvet’, the manic romance of ‘Wild At Heart’, the life-affirming fairytale of ‘The Straight Story’, the disturbingly schizophrenic journeys of ‘Lost Highway’ and ‘Mulholland Drive’.

However, at its heart, ‘Twin Peaks’ is ultimately about love and loss – from parent to child, between troubled teens and their lovers – universal themes that anyone can engage with. The characters journey from innocence to corruption and often back again, and every one of them keeps you coming back for more. That the programme remains compulsive and rewarding even after Lynch stepped increasingly away from it when the first season ended is mostly down to the exceptionally imaginative universe he created for the second season’s array of writers and directors to play with.  One episode is never enough, even for those who have experienced it previously – once it weaves its almost narcotic spell on you, you may find yourself staying up late, writing off a weekend, or even taking a week off work to delve more fully into its magical but sinister world. That ‘Twin Peaks’ still has this power 20 years on is testament to its brilliance, and it is a pleasure to see it finally given the love it deserves with this glorious box-set, complete with illuminating extras and gorgeous gold packaging. Whether you’re revisiting ‘Twin Peaks’ or new to its unique charms, you need this box-set – it’s a treasure you’ll want to return to time and again. Buy it now!