EP Review: Felix Hagan & The Family – ‘String Up The Entertainer’

As often happens these days, I find myself sitting in a hostel room, in another foreign country listening through the same playlist of albums which I’ve been hashing through on repeat for at least the last three weeks.  Then, thanks to the miracle of wi-fi on the road, something drops into my inbox which makes my ears prick up with pleasure. Just as things are starting to feel a little predictable (not just on my own music player but in the world of music in general), an opportunity to hear something that shakes the mould is more than welcomed. 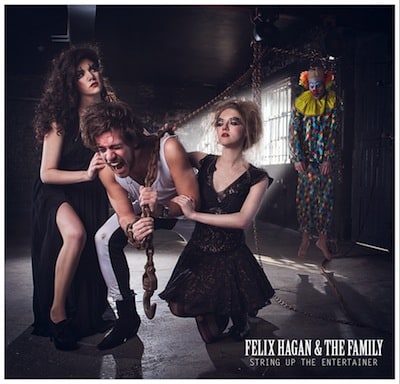 Felix Hagan himself is a one man wonder.  A composer, musician, a performer and most importantly of course, he is a born entertainer.  ‘String Up The Entertainer’ is the first offering from Felix Hagan & The Family, a six song introduction to the band and their music.

The production of the six songs leave you wanting more, clean and clear; it was made to be heard on the airwaves. Opener ‘My Lords And Ladies’ is made to open shows, an upbeat introduction with distinctive lyrics and a mid-section breakdown you’d find in charting pop.  Its catchy latino swing stylings dare you to keep your feet in place for the whole song. Upbeat and virile, near rap beat of ‘Poser Boy’ illustrates an attack on the celebrity whilst ‘My Little Lusitania (Feat. Louis Barabas)’ feels like their brooding macabre ode to the bad guy. Harmonies and classic guitar solos highlight ‘Sing Your Last Lullaby’. Infused with an array of instruments it’s hard to pinpoint it into a niche but then that could also be said for many of the bests; an infectious collection seamlessly blending pop, indie and folk.

Felix Hagan & The Family meld catchy choruses, the occasional 80s synth, plinky pianos and an expressiveness that is vaudevillian in parts. If truth be told, with a heavy dose of the camp and dramatic these songs wouldn’t go amiss in musical theatre. It’s something different and something challenging but they sure don’t disappoint.