This is a band that should be taken seriously. The self-proclaimed “ridiculous” band have already performed with some notable bands like Skindred, Alkaline Trio, Ugly Kid Joe and more. They are a band to be watched because their success can only grow from here, especially with these new tracks. It’s a record that defines the band and it’s their most personal one to date yet. If you enjoyed 21 Grams, you will enjoy this just as much or maybe even more. 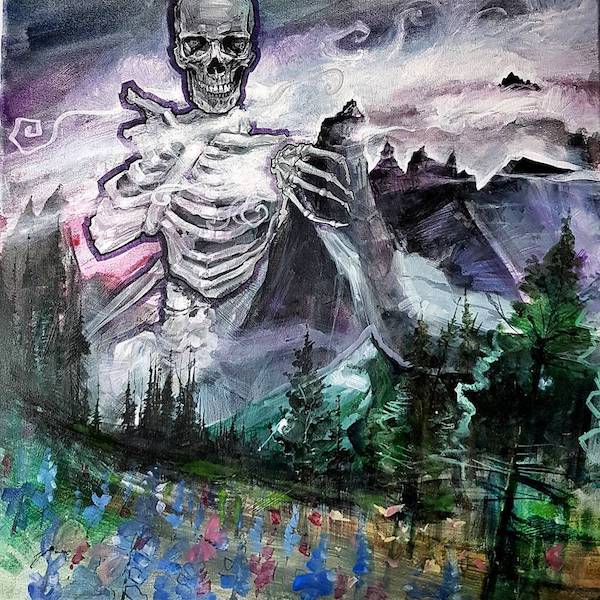 It’s easy to see why Mr Shiraz have been nominated for Pure Rawk Awards. From the success of their last album they return with an EP set to get you moshing at every show. Once again, they are nominated for the Best EP category and it’s clear to see why. From the beginning of the record to the final note on the last track, the songs are full of punchy, hard hitting tones that make you want to jump around and generally rock out.

Mountains of Kong has a great build up to it. Starting off as a solo guitar before erupting into the rest of the song, it has great structure and lyrics that are easy to remember and get stuck in your head quickly. The vocals echo each other perfectly and it’s easy to tell who is singing what part in terms of backing vocals. The end of the song makes you eager to hear more as it gives you a taste of just what the band can do.

Flatliners, meanwhile is a swift and smooth transition with the song starting straight away with no messing around. Though it’s still heavy rock, there is a pop-rock/pop-punk influence in the lyrics that is very evident but, it all works perfectly. It’s surely a song that will get the crowd singing along at a live show as well as at home listening to it.

Last tune, Step Up, when compared to the first half of the record is, metaphorically, a lot calmer. It brings in more of the pop-punk elements while not missing out on the rock elements in the guitar and the drumming. Going between the clean sounds and then the distortion gives the track a nice twist on the structure and makes the song sound decent. It’s a great show of the fact that they don’t just rely on one area of the genre and take influence from other areas. It makes them diverse, something that not all bands can be.

You’re my Type is the final track. It’s a great closer to the EP after it’s hard hitting opening track. Once again, the track is filled with plenty of catchy hooks and memorable lyrics that get stuck in your head easily. It starts straight away by going into the first verse and then ends after the final word and could possibly be a fan favourite in the future? It’s a case of having to wait and see with that one though.

The EP is released on the 26th of May on the band’s record label Wooderson Records.