This disk is a much needed look at just how important Depeche Mode have been for electronic music. It will take you on a journey through the epic 30-year journey together, from their first flirtations with the New Romantic movement and then their serious rise to prominence within the electronic scene. 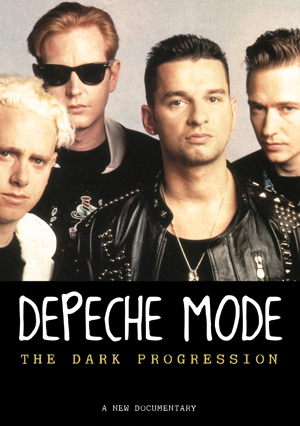 Highlights include interviews with Orchestral Manouvres in the Dark vocalist Andy McCluskey who discusses how his band became somewhat of an inspiration to DM when they first began performing. Also worth a note are the comments from electro-industrial pioneer Gary Numan about how Mode inspired his work, and in turn his creative drive. Both of these examples also provide interesting background into the beginnings of the scene and the excitement that surrounded its development over time to become one of the most important ingredients in both popular and alternative music.

‘The Dark Progression’ catalogues the band’s meteoric rise from their purely electronic debut album ‘Speak and Spell’ in 1981 and the ultimate pop of its top-10 single ‘Just Can’t Get Enough’ which was followed by the departure of original songwriter Vince Clark and his replacement by guitarist Martin Gore. From then on, the disk provides some intriguing snapshots of the huge rollercoaster ride DM took as they broke into the US with 1986’s ‘Black Celebration’ and the darker, more focussed ‘Music For The Masses’ album that followed in the next year and came choc-full of anthemic tunes including ‘Stripped’. The DVD also chronicles the band’s first stadium show that came following the massive mainstream success of 1990’s ‘Violator’ which saw the band develop their sound even further and cement their reputation as the defining band for electronic music.

The best part comes in the documentary’s final chapter as contributors excitedly describe the revolutionary direction of the raw more “band-orientated” album that was 1993’s ‘Songs of Faith and Devotion’. This section is particularly interesting as former producers including Dave Bascombe alongside the band’s biographer Jonathan Miller deconstruct Depeche’s development into the first group that was able to successfully blend rock and electro music in a commercial way. In turn there is also brief insight into the struggles that came as the band constantly changed and developed their sound over the years.

Overall, the focus on the “defining” four albums actually does the disk a slight disservice and we believe that producing an overview detailing the band’s progress right up until this year would have been far more advantageous for the creators. As usual though, the balanced information provided by the interviews with those in the know, coupled with rare live footage act as the saving grace of this unofficial offering. It’s certainly worth a viewing for die-hard fans of the band and the electronic genre at the very least.