January 2015 saw the release of Clint Eastwood’s biographical war drama film adaptation of the autobiographical memoir written by U.S Navy SEAL, Chris Kyle, who gained a reputation as the most lethal sniper in US military history with 160 confirmed kills. 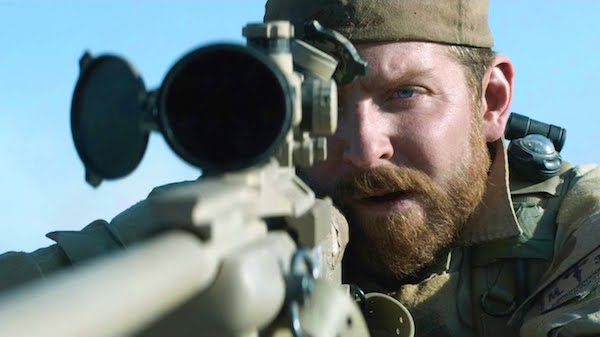 Receiving 7.4/10 from IMDb, six Oscar nominations, including Best Picture, and three and a half stars from numerous movie critic platforms, the 132 minute long film has received insightful and thought-provoking reviews. Whilst providing a thrilling and exonerating piece of cinema from an award-winning film director, the question of its political accuracy burns brightly. With some calling it ‘pure propaganda’, it begs the question if this ‘true story’ glorifies war.

One of the most horrendous lies portrayed in this film is the scene where Chris Kyle is featured watching 9/11 footage and then the scene interchanges to the sniper serving in Iraq, implying or indicating that the two are compatible; as if the US had to go get attack the bad guys, which are always the enemy and never their allies. Chris Kyle is portrayed as the heroic patriot for taking down the rivals, further highlighted with the waving of the American flag to bring home the point of the great empire. One slight problem. Iraq had nothing to do with 9/11. Dictator, Saddam Hussein, had nothing to do with 9/11. As dispicable as he was, the 9/11 attackers had no affiliation with Iraq whatsoever and the overwhelming majority of the hijackers were citizens of Saudi Arabia. To insinuate that the United States was in any way justified for the invasion of Iraq due to the events on September 11, 2001 is a lie, Eastwood.

Radio and talk show host, Kyle Kulinski writes that there should have been a little asterix to highlight that the US was wrong about the Iraq War, that the Bush Administration was wrong at best and at worst, they lied about the whole Weapons of Mass Destruction thesis.

Your delicate construction of a vindictive and manipulative hero has allowed for an enhanced level of Islamophobia and racial profiling. According to an Arab-American civil rights group, the release of the movie has led to an increase in threats against Muslims in the United States.

American Sniper doesn’t shy away from racism either. Throughout the movie, Kyle repeatedly refers to the Iraqi people as “savages”. In his book he writes “I hate the damn savages.” He goes on to write, “I couldn’t give a flying fuck about the Iraqis.” Upon returning from Iraq, Chris Kyle left no room for doubt where his position was regarding the Iraqi population after he wrote his autobiography stating “I only wished I had killed more.” Pause. I thought you went there to liberate those savages. Wasn’t that the whole point of the Iraq War?

The film has received praise for showing the emotional torment of many military men and women. Chris Kyle, in multiple scenes, is shown as if he is somewhat haunted by his service. This, of course, is to humanize him. However, this torment is completely absent from the book that the film is based on. In the book, Kyle referred to the people he killed as “savage”, “despicable” and “evil”. He writes “I only wished I had killed more … I loved what I did. I still do. If circumstances were different – if my family didn’t need me – I’d be back in a heartbeat. I’m not lying or exaggerating to say it was fun. I had the time of my life being a SEAL.”

Hypocrisy and double standards? You decide.

I have written this piece in retaliation to the bigotry that has surfaced as a result of this movie. Definition of propaganda: information, especially of a biased or misleading nature, that is used to promote a political cause or point of view. I want to specifically point out the ‘misleading nature’ part. This film plays loosely with the facts of the book and puts forward its own doctrine and version of events.

A clear example of this is with the character of Mustafa in the film. Mustafa is Kyle’s adversary and plays somewhat of a significant role in the movie. However, in Kyle’s book, Mustafa is mentioned in only a single paragraph. To take this single person and blow him up in the film is the antithesis of ‘based on a true story’. Not only is he mentioned just the one time in his book and then made into an ever-present character in the film, but he was also part of Sunni AND Shiite militias. Pause again. Anyone with just an ounce of knowledge on the Middle East would be face-palming themselves right now. Sunnis and Shiites were fighting each other. It was Sunnis vs. Shiites in the Iraq Civil War. To create a character who belongs to both sides is unimaginable and further emphasizes and highlights the blatant bias of the film by centralising this character.

The Arab-American Anti-Discrimination Committee has claimed that the movie has led to a drastic increase in anti-Muslim threats and racial profiling. One example is ‘Nice to see a movie where the Arabs are portrayed for who they really are – vermin scum intent on destroying us.” Sir, I’m an Arab and I don’t want to destroy anyone nor should I have to sit here and justify my humanity by coming out and condemning certain acts of terrorism.

Clint Eastwood says this movie is the “biggest anti-war statement in any film.” Have you ever asked yourself how at minimum 200,000 innocent Iraqi civilians died in the Iraq War? Figured it out yet? Chris Kyle is not a hero, he’s a war criminal.

The Sister Column 2: Poppy Shrimpton on Mental Health, Growth, and Resilience in debut EP "What He Said"